The back of Gilman Hall, a previously pleasant but otherwise unremarkable exterior, has become a spot worth walking out of your way to see.

Exterior brick has been re-pointed, stone and marble cleaned and power washed, and wood window frames repainted. Keystones pop like new, and the Hutzler Reading Room’s tall and elaborate stained-glass windows can be fully appreciated during the daytime. 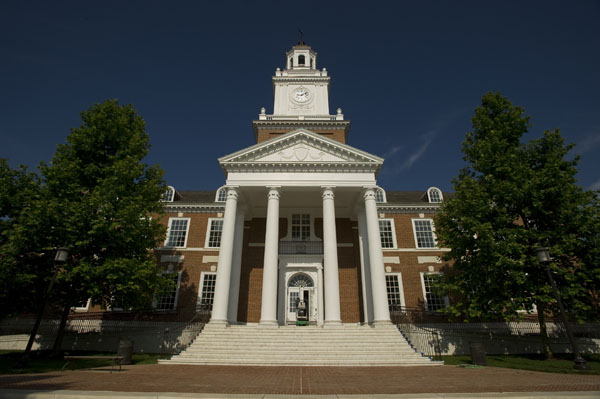 Its construction fencing removed, Gilman Hall is once again a commanding presence on the Keyser Quadrangle. At the main entrance, construction crews tend to final details. Photo: Will Kirk/Homewoodphoto.jhu.edu

Today, construction manager Bovis Lend Lease will turn the building back over to the university after three years of renovation work. A small ceremony will take place on Gilman’s front steps to commemorate the completion of the $73 million three-year renovation effort to restore a building dubbed the architectural and intellectual heart of the Krieger School of Arts and Sciences.

Construction crews last week finished off all the spaces and vacated the premises so that faculty and staff can begin moving back in early July. Over the next month, furniture will be moved in, audiovisual equipment installed and mechanical systems checked.

Opened in 1915, Gilman Hall was the first major academic building constructed after the university moved from downtown to the Homewood campus. Named for the university’s first president, Daniel Coit Gilman, Gilman Hall for many years was the campus’s central academic building, containing classrooms, seminar rooms, offices and libraries for all the humanities and social sciences departments.

The renovation project, designed by New York-based Kliment Halsband Architects, has transformed the building into a modern academic facility while preserving its architectural integrity and historic spaces. The building has new offices, meeting spaces and state-of-the-art classrooms, and 14,000 additional feet of usable space.

To finish the work, rotations of crews this past month worked from 6 a.m. to 11 p.m. seven days a week. In the project’s final days, crews painted handrails, caulked seams, screwed in light fixtures and polished newly laid terrazzo steps in the northeast and southeast stairwells. In the building’s atrium, protective flooring came up to reveal the space’s new marble floor, bathed in light that pours in from the skylight overhead.

As is customary for such a project, the contractors will have a presence in Gilman through the summer, taking care of any necessary final repairs, fixes and adjustments throughout the building.

Gilman Hall will officially open its doors on Aug. 30, the first day of classes for the fall semester. A communitywide reopening party is planned for that evening.