‘The Glorious Ones’ opens at Swirnow Theater 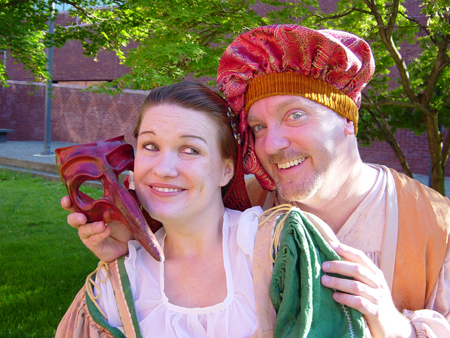 Theatre Hopkins' final production of the year, 'The Glorious Ones'

Theatre Hopkins will open its final production of the season, the Maryland première of the musical comedy The Glorious Ones, on Friday, June 11, at the Swirnow Theater in the Mattin Center on the Homewood campus. The score and book, adapted from a novel by Francine Prose, are by Lynn Ahrens and Stephen Flaherty, who received the Tony Award for their musical Ragtime. The production is directed and choreographed by Todd Pearthree, with musical direction by R. Christopher Rose.

In 2008, The Glorious Ones received nominations as best musical from Drama Desk and the Outer Critics Circle.

The Glorious Ones will run for four weekends through Sunday, July 4. Curtain time for Friday and Saturday performances is 8 p.m.; Sunday matinees begin at 2 p.m. Tickets are $20 for Friday and Saturday evenings and Sunday matinees. Student rush tickets for $5 are available at curtain time for all performances, if space allows. For reservations or information, contact Theatre Hopkins at 410-516-7159 or thehop@jhu.edu.