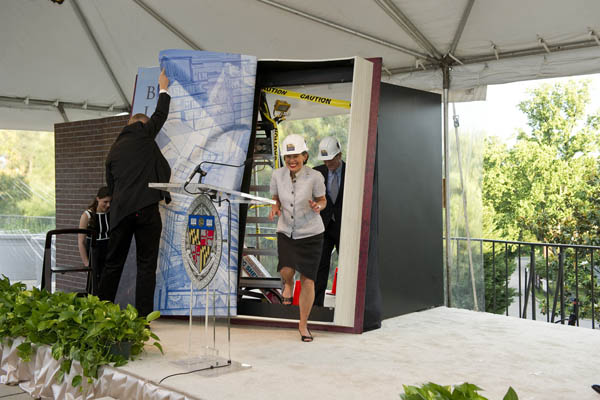 A hard-hatted Wendy and Bill Brody enter the stage through a giant book that heralds the Brody Learning Commons, now under construction. Photo: Will Kirk/Homewoodphoto.jhu.edu

More than 200 guests assembled on the south patio of Homewood’s Milton S. Eisenhower Library on Sunday, June 6, to celebrate the groundbreaking for the Brody Learning Commons. The building is named to honor the university’s 13th president, William R. Brody, and his wife, Wendy.

Winston Tabb, Sheridan Dean of University Libraries and Museums, served as the evening’s master of ceremonies, and the brief program featured remarks from President Ronald J. Daniels; Pamela Flaherty, chair of the university board of trustees; Douglas Mao, chair of the English Department; and recent graduate Zachary Epstein-Peterson. The building’s namesakes were the event’s guests of honor and led the countdown to the triggering of confetti cannons that marked the ceremonial commencement of construction. 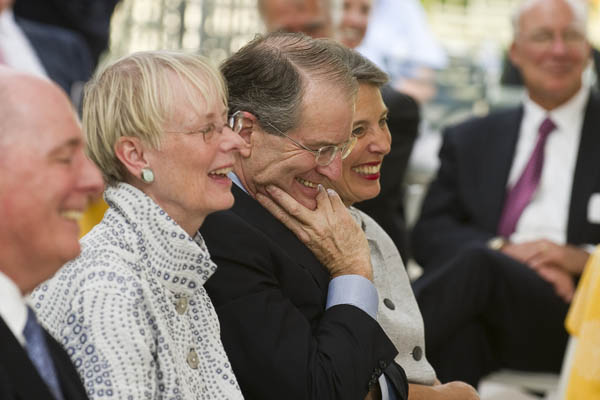 Several years in the planning, the Brody Learning Commons will be a light-filled, four-story hub for collaborative learning, with a robust technology infrastructure and spaces for group and individual study. The building will feature a quiet reading room, a new home for the Department of Rare Books and Manuscripts, new laboratory and instruction space for the Department of Preservation and Conservation, and a new atrium and café.

The building will sit directly to the south of the Eisenhower Library and connect on several floors. The Brody Learning Commons will provide more than 500 new seats and add 15 group study rooms—space that is desperately needed, as Tabb is quick to point out. “We have made every effort to ensure that this building will accommodate the way today’s students study and research while positioning us to anticipate how tomorrow’s scholars will work and learn. This is a building that will connect people and ideas, and I can think of no more fitting tribute to the Brodys’ dedication to strengthening the Hopkins community than the building that will bear their name.”

The Brodys’ time at Homewood, which began in 1996 and concluded in 2009, marked a return to the tradition, lapsed since President Milton Eisenhower’s days, of the university’s head living on campus in Nichols House. The couple’s presence each year at freshman move-in, at sporting events and concerts and, less formally, just around campus, was something Wendy Brody recalled fondly during her remarks. “I always considered myself very lucky to have such smart, talented young people as my neighbors,” she said. “Having a place where students will gather to study and learn named after us feels like we get to keep a piece of Hopkins with us forever.”