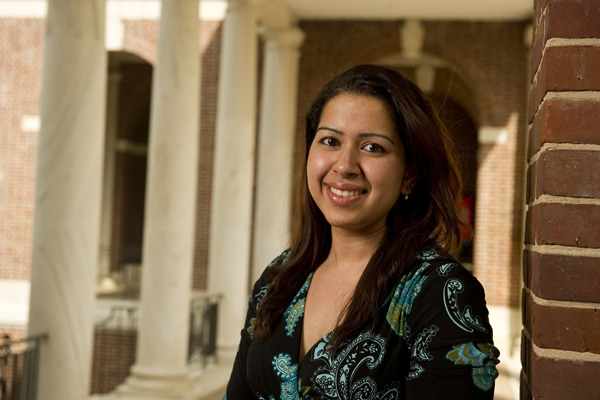 Neha Deshpande, 20, an aspiring physician who received a bachelor’s degree in biology with a minor in French from the Krieger School of Arts and Sciences on May 27, was one of 20 students selected to the newspaper’s top academics team. The award, announced this month, comes with a $2,500 cash prize. Deshpande was nominated by David Verrier, director of pre-professional programs and advising in Homewood Student Affairs.

The USA Today honor is the second major award for Deshpande, who in April was named a 2010 Truman Scholar. The award is given each year by the Harry S. Truman Scholarship Foundation to extraordinary undergraduates in their third year of college who are committed to careers in public service. The scholarship will provide Deshpande, who completed her premed studies in three years, up to $30,000 for graduate study and eligibility for priority admission and supplemental financial aid at premier graduate institutions.

Deshpande’s award winnings will help her pursue a degree in obstetrics, gynecology and maternal fetal medicine, but not right away. She plans to delay medical school for a year to teach biology this summer to students in the Johns Hopkins Center for Talented Youth program and then join the Johns Hopkins Transplant Outcomes Research Group as part of the yearlong Truman-Albright Fellows Program, which selects 24 scholars each year for entry-level positions in public service, research and educational organizations. These experiences, she said, will help shape her dual career ambitions in medicine and public service.

“It is the people you serve and take the time to understand who will ultimately define your leadership and expertise as a physician,” Deshpande said just after she was named a Truman scholar. “When I enter public service, I hope to address the racial and ethnic health disparities in our nation by focusing on the importance of preventive health care.”

While attending Johns Hopkins, Deshpande worked at the Johns Hopkins Bayview Medical Center’s Neonatal Intensive Care Unit and Labor & Delivery Suite, served as an international youth leader for the March of Dimes and conducted research comparing the health of mothers and children in Baltimore and Pune, India, her native country. She also found time to serve as co-captain of JOSH, Homewood’s all-girl, nationally competitive nine-member fusion dance team.
Asked by USA Today what her advice would be to other students, Deshpande said that it would be to do things because you care, not for your resume or to stand out or look good. Above all else, she told the newspaper, “it should be your passion that shines through, and then everything else will follow.”