An oasis for Nursing students 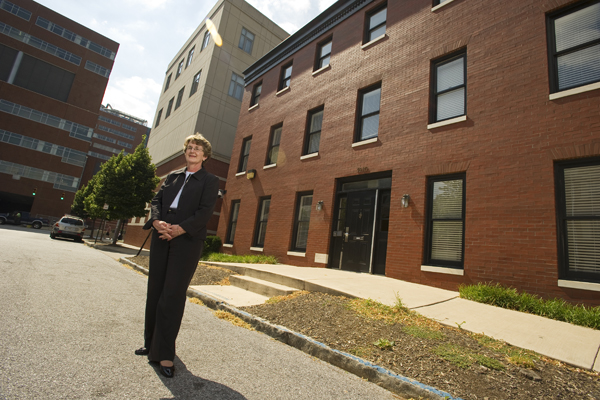 Sandra Angell, associate dean for student affairs, in front of the School of Nursing’s recently opened Student House. Over the summer, the building will be landscaped and readied for the fall semester. Photo: Will Kirk/Homewoodphoto.jhu.edu

The opening of the School of Nursing’s Anne M. Pinkard Building in 1998 was a milestone in the school’s history, as it was the first structure dedicated solely to nursing education at Johns Hopkins.

The goal was to put everyone under one roof. The result: The space filled immediately.

Since then, the School of Nursing has only grown in size, adding more students and faculty. In recent years, the school urgently needed more elbow room. Now it has some, with more on the way.

In May, the school opened the doors to its new Student House, the former Rockwell House located on Jefferson Street, behind the Pinkard Building. The Rockwell House, which contained hotel-like apartments for families of Johns Hopkins Hospital oncology patients, was vacated when a space for families was created near the hospital’s Sidney Kimmel Comprehensive Cancer Center.

The Student House gives students a place to study, relax and eat. The three-story brick building contains three study rooms, a doctoral room, lecture space, an exam-proctoring room, a full-size kitchen with a seating area, a breastfeeding room and a lounge.

The space also contains the Office of the Associate Dean for Student Affairs and all other student-related offices, including Admissions, Student Services, Financial Aid, Registrar and Career Counseling.

Sandra Angell, associate dean for student affairs, said that students sorely needed a structure designated solely for them. The student lounge in the Pinkard Building had been turned into a simulation laboratory, computer space had been lost, and there wasn’t even a place to put a microwave except in the basement, she said.

Nearly 700 students are currently enrolled in the school’s baccalaureate, master’s and doctoral programs.

“We had very little space left where students could hang out,” Angell said. “We have a library and a seating area downstairs [in the Pinkard Building], but those spaces have gotten increasingly crowded, and students really missed having a place to call their own. We also thought it would be a logical arrangement to have all the student affairs offices come over here.”

The building, Angell said, also provides a space for all student organizations, such as the school’s National Student Nurses’ Association chapter, Men in Nursing, Master’s Students, the Geriatric Interest Group and others.

Angell said that the new building has allowed the school to “decompress.” The Pinkard Building’s first-floor space, vacated by the removal of the student affairs offices, has been filled by the Office of Academic Affairs and its divisions, including the Office of Teaching Excellence. The first floor also contains the office for the new assistant dean for information and technology integration. The space formerly used for Academic Affairs and its satellites has become faculty offices.

In May 2009, the school expanded to an adjacent building on McElderry Street formerly known as the Hackerman-Patz House, now known as the SoN House, where the Institute for Johns Hopkins Nursing, the Office of Marketing and Communications, and the Office of Development and Alumni Relations are located.

The School of Nursing purchased the Rockwell and Hackerman-Patz houses as temporary measures until a new School of Nursing building could be constructed behind the Pinkard Building, where a parking lot now sits. The school purchased the lot, located on the corner of Jefferson and Washington streets, and is currently in the process of raising funds for the building, which could break ground in the next two to three years. Once constructed, the building would nearly double the school’s footprint.

Angell said that until then, the Student House will serve a vital function.

“This building is a temporary solution to our problems but very important for our needs,” she said. “When students come back in August, traffic will certainly pick up, but they are already coming over here to find quiet places to study, eat their lunch, relax and just get away from classrooms and labs.”

This summer, the front of the Student House will be landscaped and the building’s courtyard renovated. The courtyard will link to the Pinkard Building and, when the school’s new building is constructed, be part of a shared green space.