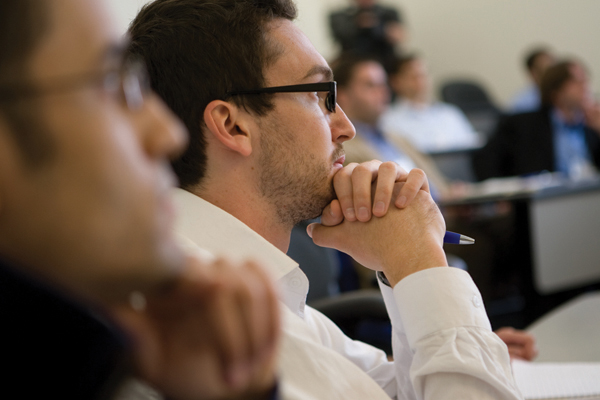 Jack Hirsch, who was born in Israel and has lived in the Africa and the United States, at a spring information session for accepted students.

When Johns Hopkins University launched a business school in 2007, the smart money reckoned on an entirely new kind of MBA program. The designers of the program then went to work and proved the wisdom of the smart money.

In the Johns Hopkins traditions of service and international outreach, the program was created so that it would focus not on how to make a killing on Wall Street but on how to cultivate business practices to help heal a troubled world. Now, JHU’s Carey Business School is about to welcome the charter class in its signature full-time, two-year program, the Johns Hopkins Global MBA.

The group of slightly more than the target number of 80 charter-class students will arrive at the school’s new Harbor East campus in early August for the start of a three-week orientation session.

Deasy Priadi is an example. The native of Indonesia has a bachelor’s degree in psychology and works for the World Bank in Jakarta. “Growing up in Indonesia, where many people live on less than $2 per day, has informed my future goals,” she says.

Key among those goals, she says, is improving the lives of the poor. She aims to turn some family-owned land in West Java into a model farm that would demonstrate the best agricultural methods and best treatment of farm workers in a nation that sometimes lacks these elements. “Business can create jobs and reduce poverty in the long run,” Priadi says.

Another member of the Global MBA charter class, Shahd AlShehail, recently worked as director of operations at Al Qadem Fashion House in her native Saudi Arabia, where she initiated a project to promote the work of women artisans. She says that she wants to become a “social entrepreneur,” and that her professional goals include challenging the accepted belief in her home country that women belong strictly in the household.

Student Jack Hirsch was born in Israel and has lived in Africa and the United States. Befitting someone so well-traveled, he says he was drawn to the international orientation of the Global MBA program, which, in the intersession of year one, will send students on an overseas project, Innovation for Humanity, in which they will work on a business problem within a community in a developing nation.

Hirsch’s professional career has been marked by experiences with start-up ventures whose “dynamic environments” have proved excellent laboratories of learning, he says, adding that he sees this same “enterprising spirit” in the Carey School.

Of the 80-plus students in the charter class, about a third are women. The students range in age from early 20s to early 40s, and their professional experience ranges from zero to 15 years. The countries from which they hail include the United States, Canada, Ghana, the Netherlands, Greece, Turkey, India, China, Japan, South Korea, Taiwan and Indonesia.

Fifteen of the students in the class have master’s degrees in fields such as engineering, public health, biotechnology and social work. Those who did not previously pursue post-graduate studies have bachelor’s degrees in areas that include psychology, sociology, biology, nursing, physics and computer science.

Among the universities they attended are Johns Hopkins, Carnegie Mellon, Chicago, Cornell, Harvard, Michigan, Northwestern, Oxford and the London School of Economics.