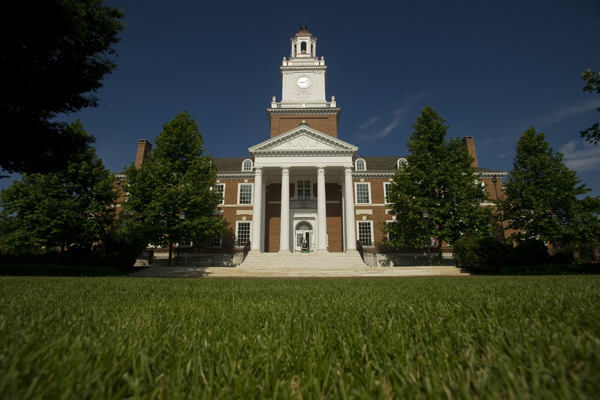 Other than a handful of representatives, humanities faculty and staff have not stepped inside Gilman Hall in more than two years. This week, people and building get reacquainted—undoubtedly with some jaw dropping along the way.

Today, the big move-in begins, as the humanities departments relocate back to the Krieger School of Arts and Sciences’ flagship building, which has just undergone an extensive three-year $73 million renovation.

The reopening of Gilman Hall brings an end to a period of separation in which the majority of the building’s faculty offices, administrative spaces and seminar rooms went to Dell House, a university-owned high-rise on the corner of North Charles and 29th streets.

Beginning this summer, for the first time in decades all 10 of the school’s humanities departments will be housed in Gilman, a reunion to which faculty are greatly looking forward.

William Egginton, chair of the Department of German and Romance Languages and Literatures, said that during the past two years he felt somewhat isolated from students and the university, and even to other departments located in Dell House.

“I would say that the biggest hit we took was in terms of the level of community here in the humanities. Not being on campus has certainly impacted us,” said Egginton, the Andrew W. Mellon Professor in the Humanities. “I can’t think of a colleague who is not greatly looking forward to and excited about the return to Gilman Hall.”

Egginton and his colleagues, in fact, will get reunited with Gilman first, as the departments will move in from the top floor down, starting with German and Romance Languages and Literatures.

This week, Dell House’s humanities tenants will all move out, ending on Saturday with the Writing Seminars and the English Department.

In addition to Dell House, humanities departments had presences in 3505 N. Charles St., Whitehead Hall, Mergenthaler Hall and the Greenhouse. Tenants of Mergenthaler will be moved on July 9 and the others on July 12 and 13.

English Professor Frances Ferguson, who holds the Mary Elizabeth Garrett Chair in Arts and Sciences, said that her separation from Gilman Hall has given her a greater appreciation of how architecture impacts the quality of education.

“To be fair, [Dell House] was not built to be an academic building. The spaces are all wrong. There was no wide corridor where people could meet and have chats, or open seminar rooms where you can have free-flowing conversations,” Ferguson said. “The departments were all separated by floors, and there were no real common spaces. I could go weeks without seeing anyone else but people from my department.”

The renovated Gilman does not lack for common spaces and wide corridors.

Some of the building’s quirks were part of the original design, which featured a U-shaped plan and floors with different levels. The old Gilman had eight stairwells, only half of which reached all floors.

Two new elevators also will access all five floors. To connect the north and south portions of the building on the rear side, a corridor was added.

The central elevators and staircase will create a “main street” for each floor, said Martin Kajic, Gilman project manager for the Krieger School, with administrative offices located at the start of a visitor’s journey.

The dramatic centerpiece of the renovated building is the three-story glass-topped central atrium. The enclosed courtyard will serve as a meeting place and a bridge between the Hutzler Undergraduate Reading Room and Memorial Hall. The atrium will feature cafe tables, soft seating and some benches. Memorial Hall’s well-worn leather couches will be replaced with leather chairs and benches positioned around the room’s fireplaces.

Ferguson recently toured the building and said she was overwhelmed by the changes.

“I think it’s fabulous,” she said. “The new atrium area is very beautiful. It’s a fantastic building that has communication all the way around. You never run into that roadblock in the back of the building like you did before, and the spaces have been made more usable. There’s just more function.”

Alexander’s Mobility Services will relocate the nearly 200 faculty, staff and graduate students to Gilman Hall. The company will move the computers, furniture, filing cabinets, office machines and other items between July 6 and July 15.

Contractors will have a continued presence over the summer, taking care of any necessary final repairs, fixes and adjustments throughout the building.

Gilman Hall will officially open its doors on Aug. 30, the first day of classes for the fall semester.