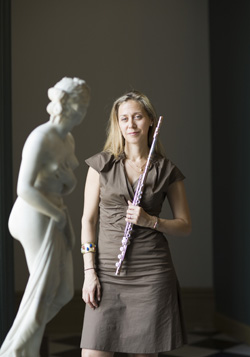 Flute virtuoso Marina Piccinini, an internationally acclaimed soloist and a faculty artist at the Peabody Conservatory, will perform on Wednesday, July 7, with the Brasil Guitar Duo—Joao Luiz and Douglas Lora. The three will play a Bach sonata and several 20th-century works arranged for flute and two guitars, the distinctive instrumentation that this special combination of talents makes possible.

Later this year, a double CD of Bach’s complete flute sonatas performed by Piccinini and the Brasil Guitar Duo will be released by Avie Records.

The recital is the festive opening to the Marina Piccinini International Flute Master Classes, an intensive weeklong program that accepts about 20 of the world’s most promising young flutists annually. There will be a free closing recital by the participants on Monday, July 12.   See Music.