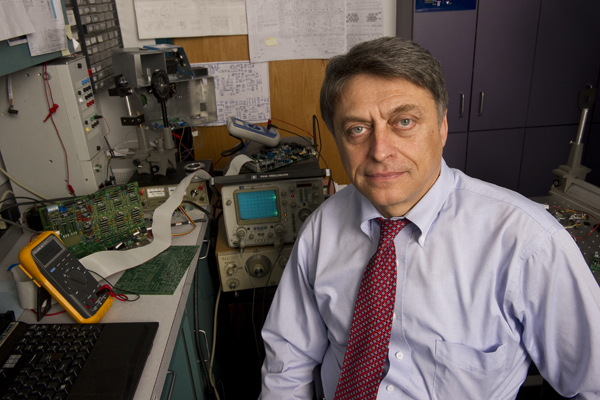 Of all the disorders of vision, amblyopia—sometimes referred to as “lazy eye”—may be one of the most frustrating for clinicians and public health officials. It is both relatively common, affecting as many as 380,000 children in the United States alone, and relatively easy to address if treatment is initiated before age 3.

But few children are screened for misalignment of the eyes (strabismus) or blurred vision, the two primary causes of amblyopia. Although there are commercially available instruments that record light patterns in the pupils of a child’s eye to screen for refractive errors such as nearsightedness, farsightedness and astigmatism, there has yet to be a device that can reliably detect strabismus—especially among pre-verbal infants and toddlers, who would most benefit from early treatment. Left untreated, an amblyopic eye will never develop good vision and may even become functionally blind.

“When anywhere from 1.5 percent to 3.5 percent of the population has amblyopia, you need to be screening hundreds or even thousands of children each day in order to identify the tens of thousands of children who would benefit from early treatment,” said Boris Gramatikov, assistant professor in Pediatric Ophthalmology at Johns Hopkins’ Wilmer Eye Institute. “Unfortunately, up to now there has never been an easy and cost-effective way to screen that many children on an ongoing basis.”

Amblyopia is poor vision in what appears otherwise to be a normal eye. It comes from defective visual input to the brain during infancy and childhood, leading to abnormal development of the binocular, or two-eyed, visual system that allows depth perception and other important visual capabilities. Although the term “lazy eye” is commonly used to describe the disorder, the layman’s term is in fact a misnomer. A better description might be “lazy brain” because it is the visual processing that is at fault in amblyopia; the affected eye itself is perfectly healthy. The part of the brain that corresponds to the affected eye is not stimulated properly and so fails to develop normally during the critical period of infancy and early childhood, during which key parts of the brain controlling vision, language and other skills develop.

In the early, more plastic period of brain development, amblyopia can often be successfully treated by putting an eye patch on the “good” eye to force the brain to use the affected eye and overcome the faulty visual processing. But that treatment is really effective only in early childhood. As the brain matures, the opportunity diminishes, which is why undetected, untreated amblyopia is among the top-three causes of visual impairment in adults.

The Hartwell Foundation, which seeks to stimulate discovery and foster transformative approaches in early-stage biomedical research that will benefit children of the United States, chose Gramatikov as one of only 10 recipients of its award in the 2009 competition. The grant provides $100,000 per year in direct costs for three years, supporting Gramatikov in the design, construction and testing of a prototype pediatric vision screener. It is expected that the innovative hand-held device will enable nonspecialists at schools, day care centers, clinics or other locations to routinely screen many thousands of young children each year. (For more information on the 2010 Hartwell grant competition, see sidebar.)

The Hartwell Foundation’s president, Frederick Dombrose, described Gramatikov as an outstanding innovator. “We seek to inspire individual achievement by offering individual researchers an opportunity to realize their professional goals,” he said. “Dr. Gramatikov’s development of this new vision screening device addresses an unmet clinical need with the potential to revolutionize early detection for a very common eye disorder and to prevent lifelong disability for thousands each year from a readily treatable condition.”

Although other screening devices have been attempted in the past, the critical challenge in screening for amblyopia is the need to know exactly where each eye is looking and whether each eye is focused. Only with that information is it possible to make the highly accurate measurements that can reveal the disorder. Older children can be told where to look, but pre-verbal children cannot, and this greatly reduces the window of opportunity for identifying amblyopia early.

The Johns Hopkins–developed scanner uses a novel and patented technique known as retinal birefringence scanning. It is the first and only technology that allows precise identification of the direction of gaze using information gleaned from the fovea, the most sensitive part of the retina, located in the back of the eyeball near the optic nerve.

The screening device that Gramatikov is developing will be held about 12 inches from the eyes, allowing remote examination of a child without head restraint, so that the child can be seated in a parent’s lap or in a high chair. In a semidarkened room, the operator will activate a small flashing light and beeping sound that will draw the child’s attention and eye focus. As the child looks at the light, the device will take repetitive readings each half-second, and will signal the operator when a successful measurement is completed.

“The real challenge is to get the 3-year-olds to look at the target,” said Gramatikov, who notes that although the operation of the device will be simple enough for a nonspecialist to use, the technology behind it incorporates basic research, clinical validation and a strong translational component.

The Hartwell Foundation each year selects 10 research institutions to participate in its grant competition. In 2010 it extended an invitation to Johns Hopkins to nominate four faculty researchers to submit proposals for the Individual Biomedical Research Award, an invitation Hopkins has received and accepted every year since the awards program began in 2006. Researchers from Johns Hopkins have been named Hartwell Investigators in each of the past four years.

The Hartwell Foundation recognizes research institutions that fully participate in the nomination process with funding for a Hartwell Fellowship, which supports one postdoctoral fellow of their choice who exemplifies the values of the foundation. The award supports scientists in the early stages of biomedical research careers by enabling them to pursue further specialized training as part of their career development. Eric Meisner, a postdoc in the Whiting School’s Department of Computer Science, was selected by Johns Hopkins to receive the 2009 Hartwell Fellowship, which provides direct support of $50,000 annually for two years. Meisner’s goal is to develop a less invasive, more accurate way to diagnose and treat stenosis, a narrowing of the airway just below the level of the vocal cords in infants and children.