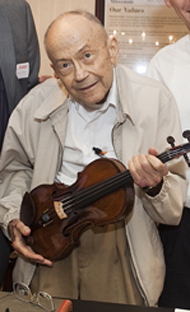 Karl Kostoff at the presentation of the 1620 instrument that is now known at Peabody as the Kostoff Maggini. Photo: Matthew Borkoski

The Peabody Institute recently received a donation to its fine instrument collection that instantly becomes its finest.

Karl Kostoff, 85, a former professional musician and longtime employee of the university’s Applied Physics Laboratory, has gifted to Peabody a rare Maggini violin crafted in 1620.

Kostoff said that he wanted the instrument to be played and heard by current and future generations.

The instrument will be cared for by Peabody’s Ensembles Office, which, among other responsibilities, provides instrument loans and rentals to ensemble participants, faculty and students for practice and performances.

The 390-year-old Maggini violin joins a Peabody collection of a half-dozen fine string instruments that include a 1702 Rogeri Cremona, a 1680 Carlo Tononi and a 1640 Testore.

An authentic Maggini is among the rarest of all violins. Giovanni Paolo Maggini did his violin making between 1590 and 1630, and it’s believed he learned his craft from Gasparo da Salo, dubbed the father of all fiddle makers. This particular instrument features double purfling and a graceful arabesque on the back, and is in exquisite condition.

Kostoff purchased the Maggini some 40 years ago for $9,000, without knowing its historical significance. The violin was recently appraised at $350,000.

Kostoff has said that he always considered himself the caretaker of the Maggini, not its owner, and did not want it to go into a museum.

Peabody Director Jeffrey Sharkey said that Peabody is extremely appreciative and excited about the gift. “Fine string instruments do well when someone loves them and someone plays them,” he said. “The Maggini will be the pinnacle of our string collection.”

The donation includes an English bow from the workshop of W.E. Hill & Sons, appraised at $10,000, and the catalog of the Royal De Forest Hawley violin collection of which the Maggini was a part. After the death of Hawley, the collection was broken up, which is how Kostoff was able to obtain it without knowing its significance.

Kostoff also made an estate pledge for a $50,000 fund for the maintenance of the Maggini violin.

Kostoff joined APL in the mid-1950s and retired in 1988. He worked on the ground level of the Lab’s computer programming efforts, writing programs for early IBM computers that filled an entire room. He later worked on projects for Navy missile guidance systems.

Kostoff played violin, and his pre-APL career included positions with both the Baltimore Symphony Orchestra and the National Symphony Orchestra. At APL, he was rehearsal director of the brass ensemble and principal conductor at programs the group presented at APL’s annual company concert. He now lives in Leisure World of Maryland, a private age-restricted community located in Montgomery County.

The Sandy Spring Bank assisted Kostoff with the transaction to Peabody. Sergio Oliver, the bank’s senior vice president and division manager, knew Kostoff well and conducted a search of several potential beneficiaries. Oliver told the Montgomery County Gazette newspaper that Kostoff made the final decision to donate it to the Peabody.

“Karl’s desire is to have the violin entrusted to an organization that will ensure it be preserved as a prime example of the rich heritage of violin making and as a living, playing instrument that is a part of a supervised collection,” he said. “His decision to gift it to the Peabody Institute will allow them to showcase the ‘Kostoff Maggini’ and its extraordinary sound in venues at home and abroad. It will be utilized only by students demonstrating the highest level of talent and faculty members who would concertize or record with the instrument.”

The 1620 Kostoff Maggini has a rich
history. The instrument, one of only 60 made by Maggini in his lifetime, was owned by the three most important collectors in violin history: Luigi Tarisio, Jean-Baptiste Vuillaume and Hawley.

Keng-Yuen Tseng, chair of Peabody’s Strings Department, first encountered the Maggini in April and couldn’t resist the temptation to play it.

“This is a very special violin,” Tseng said. “In terms of sound, it has a darker quality, and with such an old age, it still has good power, which surprised me. It does not like to be pushed or pressed. One needs to possess great bowing techniques to do justice to this instrument. We were informed this could be a good chamber music instrument, but as soon as I started to play the violin, I knew it belongs on the concert stage.”

Tseng will give a recital on the Maggini at 3 p.m. on Sunday, Sept. 19, in Peabody’s Goodwin Hall.

The presentation of the violin took place on June 22 in the Sandy Spring Bank’s boardroom in Olney, Md. On hand were Sharkey, Kostoff and Ivan Stefanovic, a Peabody faculty member and assistant principal second violin for the Baltimore Symphony Orchestra.