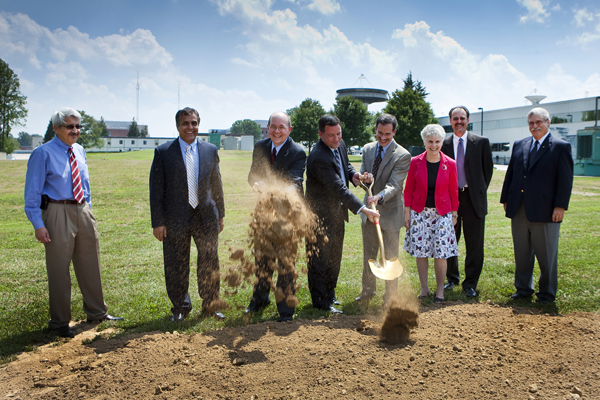 Officials from the Johns Hopkins University Applied Physics Laboratory, along with government and construction industry representatives, broke ground July 16 for a new spacecraft assembly and testing facility on the APL campus in Laurel, Md.

Designated as Building 30, the $30 million facility is scheduled to open by fall 2012. The 47,500-square-foot structure will include optics laboratories, mechanical assembly areas and a high-bay clean room area capable of supporting either classified or unclassified integration and test operations. APL, mainly through its Space Department, creates innovative systems that achieve objectives for NASA and space-related Defense Department missions.

“What a great occasion for the Applied Physics Laboratory,” said John Sommerer, head of APL’s Space Department. “Just last December, APL celebrated its 50th anniversary as a space-faring organization. This facility will allow us to work on other spectacular voyages of discovery over the coming decades.”

APL has applied for LEED certification for the new building. The project is already off to a green start: APL was able to recycle 98 percent of the material from the 50-year-old Building 11 that was demolished to make way for Building 30.

APL has approximately 4,500 staff members who occupy 32 buildings on its 399-acre main campus and six leased buildings in the adjoining Montpelier Research Park.