Nonprofits in city get greening tips 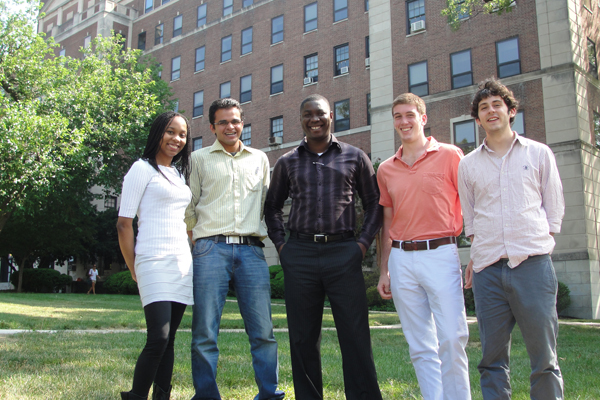 Local organizations that assist those in need are getting some collegial Earth-friendly support this summer.

The Johns Hopkins University and Baltimore City recently embarked on an effort to green area nonprofits while at the same time educating students on sustainability measures and the vital role that these socially focused organizations play in the community.

The goal is to assess opportunities to reduce these organizations’ energy use, greenhouse gas emissions and other associated environmental impacts.

The inaugural cohort of six students, who were trained and supervised by the university’s Sustainability Office staff, looked at details such as weatherproofing, lighting fixtures, toilet and sink water flow, recycling efforts and even in-house food options. The students, who broke into three teams of two, would arrive on a Monday to conduct the visual audit, return for a follow-up visit midweek and then on Friday to present a report of their findings. The students will wrap up all 20 audits this week.

In the detailed reports, the groups make specific recommendations for facility improvement and retrofits such as the use of energy-efficient light bulbs, insulation, plastic window covering, low-flow toilets and “smart” power strips. They also advise on energy management and environmental-friendly behavioral changes, such as composting, recycling programs, biking to work and turning off the lights when not in a room.

The reports provide specific energy- and water-saving estimates and how they can be obtained. For example, one organization was advised that just by turning air conditioning units up one degree during the summer could save 3 percent on an electric bill. To realize even greater savings, some were told to replace their aging CRT televisions with newer flat-panel ones, which use less energy.

The reports point the organizations to grant, rebate and financing opportunities that can pay for the upgrades, and to free services such as BGE’s Smart Energy Savers Program. The students also provide connections to the city’s energy team, which can assist further in suggested upgrades or changes.

The project, funded by a $190,000 U.S. Environmental Protection Agency grant, is part of Johns Hopkins’ broad multifaceted Implementation Plan for Advancing Sustainability and Climate Stewardship, announced earlier this year. The plan encompasses research, education and community outreach, in addition to a lofty goal of cutting by 2025 the university’s emissions of climate-changing carbon dioxide gas by more than half from projected levels.

A key element of the plan is to put Johns Hopkins’ knowledge to work contributing to Baltimore’s and Maryland’s sustainability and climate change efforts.

Davis Bookhart, chair of the Johns Hopkins Sustainability Committee and director of the Office of Sustainability, said that the Climate Showcase Project was viewed as something that could benefit all participating parties and have an immediate and lasting impact.

“One of our top goals with this program is to help area nonprofits use their resources more efficiently. That way they can have more time and money to contribute to making Baltimore a better place and help people in the city,” Bookhart said. “This is also a great service to the students. They not only learn about sustainability measures through our intense training program; they work closely with the Baltimore community and can be agents of change themselves.”

Bookhart said that a pleasant and somewhat unanticipated outcome was that students have come away with a new perspective on what it means to work at a nonprofit. As part of the assessment, the students researched each organization and conducted interviews with staff to get a sense of the culture of the agency and its work.

“They have heard some really inspirational stories of people using their time and money all in the name of helping others,” Bookhart said. “They come back with some amazing stories of the human condition.”

The Climate Showcase Project is overseen by Joanna Calabrese, the university’s newly hired sustainability outreach associate. Calabrese, who worked closely with all the students and tagged along on many of the assessments, said that the teams take pains to understand an organization’s unique needs and to treat each individually.

“We try to listen, not preach,” she said. “You have to gauge the culture and be sensitive. Some organizations are financially strapped; others might not be interested in composting, for example. We try to work together through engagement. It’s about educating them on their options and allowing them to choose the ones that work best and that will lay a foundation for more-sustainable behavior.”

Dom Burneikis, a participant in the project, said that he has enjoyed the opportunity to learn about the missions of the six nonprofits he has visited.

“It’s been great to learn who they serve and why, and then turn around and offer them support,” said Burneikis, a senior majoring in public health. “We’re trying to make recommendations that will stick and that are achievable. I would say we are about making investing in sustainability attractive and useful.”

The student groups will work with each of the 20 organizations throughout the next year, collecting data and gauging the effectiveness of measures taken.

Bookhart said that a new cohort of students will be trained next spring and then sent out to 20 to 30 nonprofits identified with input from Baltimore City and the Abell Foundation. The goal is to audit 90 nonprofits in the next three years.