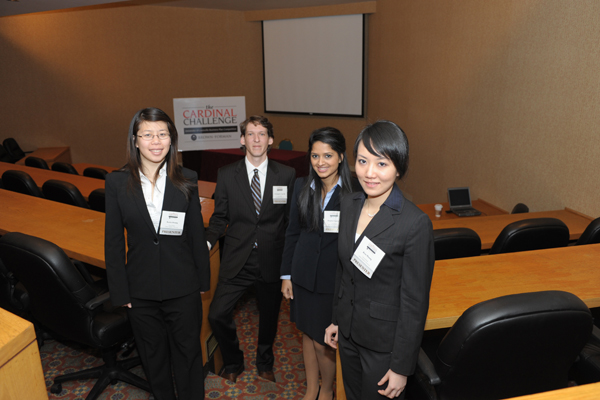 The birth of a baby is usually a joyous event, but when a child is born too early, worrisome complications can occur, including serious health problems for the baby and steep medical bills for the family. To address this, Johns Hopkins graduate students and their faculty adviser have invented a system to pick up very early signs that a woman is going into labor too soon.

The normal length of a pregnancy is 40 weeks, while babies born before 37 weeks’ gestation are considered to be preterm. By detecting preterm contractions with greater accuracy and sensitivity than existing tools do, the new system could allow doctors to take steps at an earlier stage to prevent premature births, its inventors say.

The health concerns and costs associated with premature births have received increasing attention in recent years, due in part to a rise in the number of multiple births; the use of fertility treatments, which can cause multiple births; and an increase in the number of women having babies later in life. These trends are all associated with a higher risk of preterm labor.

The scope of the problem is significant: The National Center for Health Statistics has reported that about 500,000 premature live births occur annually in the United States alone. In a 2006 report, the Institute of Medicine described the high rate of premature births in the United States as “a public health concern that costs society at least $26 billion a year.” Preterm births are widely linked to neonatal deaths or serious health problems, such as breathing difficulties and brain-development issues.

To help reduce these statistics, the Johns Hopkins biomedical engineering students wanted to improve the way doctors detect preterm labor. They designed and built a prototype that is now undergoing testing in animals. With further refinement, the students say, their system could eventually help physicians discover early signs of labor and allow the doctors to delay preterm deliveries, giving these babies more time to mature.

“The problem is, the technology now used by most doctors usually detects preterm labor when it’s so far along that medications can only delay some of these births for a few days,” said Karin Hwang of Ontario, Calif., one of the student inventors. “But if labor can be detected earlier, medications can sometimes prolong the pregnancy by as much as six weeks.”

Hwang was one of four Johns Hopkins students who devised and built the system in a yearlong bioengineering innovations and design master’s degree program. The others were Deepika Sagaram, of Philadelphia; Rose Huang, of Brooklyn, N.Y.; and Chris Courville, of Lafayette, La. Along with their faculty sponsor, Abimbola Aina-Mumuney, an assistant professor of maternal fetal medicine in the Johns Hopkins School of Medicine, the students have formed CervoCheck, a limited liability corporation, to advance the project.

The students met Aina-Mumuney last year, early in their degree program, when they were asked to follow physicians on their hospital rounds to discover what they needed most to improve patient care. “I told them it’s really important to know at the earliest possible point when a pregnant patient is contracting,” said Aina-Mumuney. “It’s something I’ve had a strong interest in.”

The students initially proposed a new blood test to find proteins associated with early labor, but Aina-Mumuney steered them toward building a better device to detect physical signals in the expectant mother’s body. Physicians have long relied on a tocodynamometer, a belt that is attached to a woman’s abdomen for external monitoring of uterine contractions, to find signs of preterm labor. But Aina-Mumuney said that this device is not effective at picking up preterm labor very early in a pregnancy, or in cases where the patient is obese. “I suggested that the students come up with an internal device,” she said. “I told them that if we could bypass the abdomen, that would be ideal.”

After much research and brainstorming, the students built a prototype ring made of medical grade biocompatible silicone elastomer. The ring is designed to be compressed and inserted into the vaginal canal at a physician’s office or hospital. Embedded within the ring are sensors designed to pick up electrical signals associated with uterine contractions.

“With these sensors, we’re detecting signals directly from the places in the body where they originate, as opposed to trying to pick them up through the abdominal wall,” said Courville, one of the inventors.

The prototype has not yet been used on human patients, but the students say that early animal test results are promising, and that improvement of the system is continuing.

Their faculty adviser, Aina-Mumuney, said she is pleased by the great enthusiasm that the biomedical engineering students brought to the project. “They can truly see the impact this could make,” she said. “If we can detect preterm labor at an earlier point and can delay the delivery by six weeks or more, the risk of the baby being born with serious health problems will go down dramatically.”

The inventors of the CervoCheck device say that their system may someday help to reduce such expenses. “We estimate that the cost savings could be more than $44,000 per patient for every preterm birth we could prevent,” co-inventor Hwang said.

Working with the Johns Hopkins Technology Transfer Office, the students and Aina-Mumuney established CervoCheck and have obtained a provisional patent covering their invention. The students also have received high marks and prize money in several competitions in which the viability of their device and its sales potential were judged. The team placed first in the University of California, San Francisco, Business Plan Competition; second in business plan contests sponsored by the University of Texas at Arlington and Noetic Technologies; and third in the University of Louisville Cardinal Challenge and the Johns Hopkins University Business Plan Competition. The team’s winnings from these contests totaled $22,000.

All four students recently received their master’s degrees from Johns Hopkins. Sagaram will be entering medical school at Brown University, and Courville has accepted a job at a health care software business. Hwang and Huang have opted to work full time on moving the CervoCheck device toward commercial use. “We’re passionate about seeing this become a reality,” Hwang said.

Center for Bioengineering Innovation and Design at Johns Hopkins