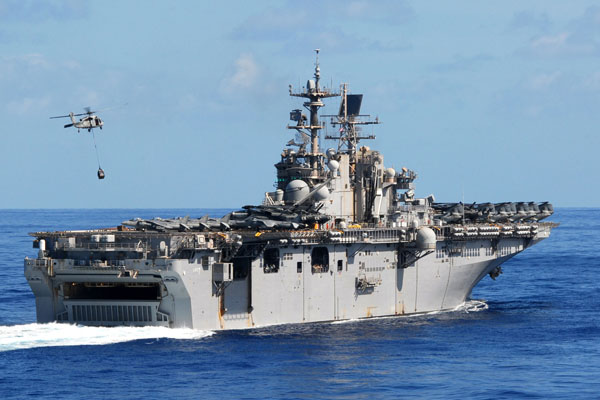 Johns Hopkins Medicine has signed an agreement with the U.S. Navy to provide medical and disaster research experts to staff the USS Iwo Jima during the next four months, as the ship sets sail to provide medical assistance to Colombia, Costa Rica, Guatemala, Guyana and Suriname.

The voyage is part of the Navy’s annual humanitarian project, Operation Continuing Promise.

Between August and early November, Johns Hopkins plans to send at least 16 doctors, nurses, physician assistants, researchers and members of the Johns Hopkins Go Team, who are trained in disaster response, to staff the vessel.

The first Johns Hopkins team departed on Aug. 8 from Baltimore/Washington International airport to meet the Iwo Jima off the coast of Colombia. The group includes Christina Catlett, an emergency doctor and disaster expert from The Johns Hopkins Hospital; Robert Dudas, director of Pediatric Hospitalist Medicine at Bayview Medical Center; Melisa Rios, an emergency nurse from JHH; and Lauren Sauer, a senior research coordinator from the School of Medicine.

The team members, who will join experts from other organizations assisting with the Continuing Promise mission, will be helicoptered by the Navy to several preselected sites in Colombia, where they will set up medical clinics in hospitals, schools and other locations. The team also will provide training and support to local doctors and other health care providers, and will conduct research to assess the local governments’ medical and logistical readiness for a large-scale disaster. Catlett, who is the Go Team director and who worked in Haiti after the January earthquake, also will provide disaster medicine training to Navy, Marine Corps and civilian personnel onboard the Iwo Jima.

Future teams from Johns Hopkins will include members of the departments of Pediatrics and Emergency Medicine and students from the schools of Nursing and Public Health.

Jim Scheulen, executive director of the Johns Hopkins Office of Critical Event Preparedness and Response, who signed the Continuing Promise agreement and is coordinating the Johns Hopkins staffing, said that the partnership is an outgrowth of work with the Navy during the Haiti earthquake relief effort earlier this year. CEPAR sent two Johns Hopkins medical teams to help staff the USNS Comfort, the Navy’s floating hospital, while it was stationed in Haiti.

CEPAR is interested in forging a stronger relationship with the Navy, Scheulen said, so that it can be prepared in the future to move lifesaving medical help and other expertise into major disaster zones quickly and with the proper security and logistical support. In addition, Scheulen said, Operation Continuing Promise gives Hopkins and CEPAR an opportunity to share their extensive disaster medicine expertise around the globe and to study and learn from the planning, techniques and protocols that other countries have established for responding to major calamities with significant casualties.