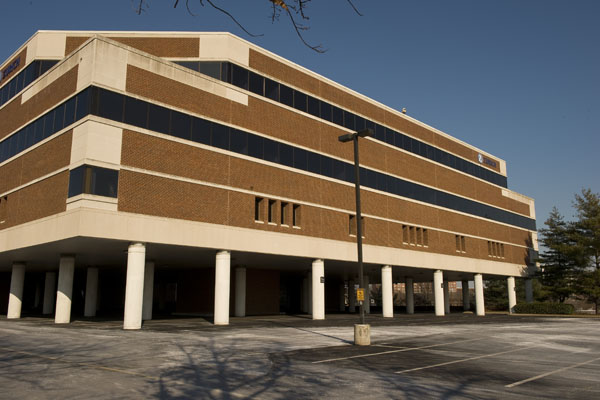 Johns Hopkins at Keswick comprises two buildings, one of which is seen here, with a total of 415,000 square feet of space. Photo: Will Kirk/Homewoodphoto.jhu.edu

New paint’s being applied, elevators are being upgraded, security is being enhanced to Johns Hopkins standards, and a new name has been bestowed on the former Zurich Insurance Co. property in North Baltimore: Johns Hopkins at Keswick.

By October, the first wave of Johns Hopkins employees—some 350 members of the Patient Financial Services Office currently at Johns Hopkins Bayview Medical Center—will move into their new home at Keswick Road and 40th Street, less than a half-mile from the university’s Homewood campus.

The next wave of employees should arrive early next spring and summer, said Brian Dembeck, executive director of Johns Hopkins Real Estate, the office that oversees properties for both the university and health system.

The second group to move into Johns Hopkins at Keswick will be some 500 members of the controller’s offices for both JHU and JHHS, as well as the financial services centers—handlers of accounts payable and receivable, payroll, and related activities. They will be moving from Johns Hopkins at Eastern, the former all-girls’ high school on 33rd Street, about a mile east of the Homewood campus. Various Johns Hopkins offices have been in that building since 2001.

Johns Hopkins at Keswick comprises two buildings—one built in 1970 and renovated in 1999, the other built in 1981—with a total of 415,000 square feet of space. The property’s large open floors and two data centers make it ideal for housing financial services and information technology operations, Dembeck said.

The facility includes a cafeteria, meeting and classroom spaces, and 1,500 parking spaces. “It’s a big place,” he said.

The Keswick property also will have an information technology data center to supplement the Mount Washington campus’s IT operation, Dembeck added, and will feature a “seamless” fiber-based electronic system consistent with the computers at all other Johns Hopkins entities—meaning, for example, that everyone’s e-mail will remain as it is now.

At the time the property was acquired in March, James T. McGill, then the university’s senior vice president for finance and administration, said that its “location, layout, infrastructure and amenities make it a very attractive facility for both Johns Hopkins institutions.”

Ronald Werthman, the Johns Hopkins Health System’s vice president for finance, said that the institutions’ purchase of the property made sense for the future.

“The more we looked at both our future needs and what we’re paying now to operate in leased and owned space throughout the metro area, the clearer it became that buying this property made good economic sense for both entities,” Werthman said.

Although the university and health system are separate corporations, they have combined several large back-office operations into what they call “shared services centers” that serve both entities. These centers work together daily, so it made them prime candidates to be the first to move into the new property. Additional still-separate university and health system offices that often collaborate likely will join them there. These will move into Johns Hopkins at Keswick or Eastern High as leases expire and other business considerations dictate.