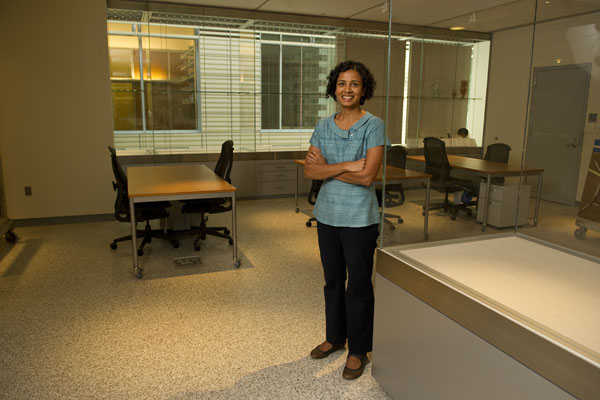 Curator Sanchita Balachandran in Gilman Hall’s new Archaeological Museum, which will welcome both students and the public this fall. Photo: Will Kirk/Homewoodphoto.jhu.edu

In the past, visitors to Homewood’s Gilman Hall might have strolled by Sanchita Balachandran and wondered what she did. She’d have been the one wearing the respirator and purple rubber gloves, likely on her way to conserve an Egyptian mummy in a nondescript, dimly lit room on the first floor of the building.

Balachandran, the mummy and the rest of the objects in the university’s archaeological collection are now poised to come out into the light—customized fiber-optic ones at that—and receive much greater visibility.

In July, Balachandran, an objects conservator by training, was named curator of the new Johns Hopkins Archaeological Museum, a glass-dominated 1,600-square-foot space located directly below Gilman Hall’s new atrium courtyard. The museum, designed by Kliment Halsband Architects with conservation-grade display cases and cabinets crafted by noted local firm Helmut Guenschel, is intended for the exhibition and study of the university’s archaeological artifacts.

Betsy M. Bryan, the Alexander Badawy Professor of Egyptian Art and Archaeology and director of the Archaeological Museum, said that Balachandran’s appointment brings to fruition the labors of faculty from a number of departments who worked with the architects to create a truly state-of-the-art museum space.

“Only someone like Balachandran can see the installation and maintenance of such a complicated and carefully designed environment,” Bryan said. “Without the expertise that Balachandran brings, the objects might find their way into the modern space, but they would not be properly conserved, and their need for specific environmental conditions might well go ignored. The new Archaeological Museum will take care of the university’s treasures as never before.”

The collection—founded in the 19th century through the interest of the university’s first president, Daniel Coit Gilman—features several thousand ancient objects, including Greco-Roman and Near Eastern pieces that date from pre-dynastic Egypt into the Byzantine and Islamic periods. Professors of art history, Near Eastern studies, classics and more have used the pieces in their classrooms. Now, however, the museum itself will be the setting for teaching about the collection, and will be available to faculty from all departments.

The bulk of the objects was previously stored in two crowded first-floor rooms in Gilman that had very limited display capacity. The university wanted a more expansive and flexible space for the exhibition and study of its objects.

“This new museum is going to make so many more materials and objects from the collection visible, and, ultimately, the idea is to make it a study collection where students can have a hands-on experience with these ancient artifacts,” Balachandran said. “It’s through these objects and student and faculty research that we will learn more about the ancient world. It’s very exciting.”

Display cases form the perimeter of the museum and will show off a relatively small portion of the collection. The cases, each 40 feet long and 11 feet tall with linen-covered center dividing panels, are made mostly of metal and imported double-sided polished glass. A thousand fiber-optic light fixtures will shine on the objects.

The exterior side of the perimeter cases will contain a semipermanent display of some of the collection’s highest-quality pieces, organized by region and cultural group.

“You’ll see some of the masterpieces of the collection,” Balachandran said. “These are also more stable pieces that can withstand greater light exposure.”

The interior side of the cases will feature objects grouped by theme and culture. The perimeter cases also feature metal base cabinets with 42 glass-covered specimen drawers for small objects such as pottery fragments, bronze figures and scarabs.

In addition to the perimeter cases, free-standing units for the center of the museum were designed. Those will serve as space for rotating exhibits and will also feature objects from the Ancient Americas.

Balachandran has been teaching classes and working with the collection at Johns Hopkins since 2007. She was previously the principal conservator of the Baltimore-based Objects Conservation Studio, a company she founded. Balachandran has worked closely with other conservators, museum professionals and contractors on projects regarding object-conservation assessments, surveys and treatments.

She trained at New York University’s Institute of Fine Arts, where she earned graduate degrees in art conservation and art history, and completed advanced-level internships at the J. Paul Getty Museum and Harvard Art Museums’ Straus Center for Conservation.

Balachandran views her responsibilities as curator more broadly than the traditional sense. In addition to taking care of the collection, Balachandran will make it more accessible for teaching, research and study.

“We are very interested in trying to link up departments that have not traditionally worked with these objects and materials,” she said. “We would love to bring in the different science departments here and see how we can learn about and study these artifacts in a more interdisciplinary way.”

As part of this effort, the museum will feature some nondestructive testing instruments, including an X-ray fluorescence instrument and a Raman spectrometer that will allow users to learn more about the materials the objects are made of.

“Ultimately, we hope to get more sophisticated scientific equipment involved to learn about these artifacts,” she said. “They haven’t really been studied from that point of view before. We’d like to bring in engineers, chemists, geologists and biologists. We foresee a huge scope for collaborative work where conservators, art historians and scientists can literally put their heads together to see what these objects were made of, how they were fashioned and how they were used.”

A portion of the artifacts will be on display at the museum by the end of October. Balachandran said that a collection like this cannot be rushed back into the light, as the objects need to be conserved, the displays designed, object mounts crafted and the environment controlled, right down to an exact humidity and temperature.

“We need everything to be stable before they can be put on view,” she said. “Some of these objects have existed for thousands of years. We want to ensure their lifespan. There are a number of things that need to happen before we can open the doors.”

The grand opening of the museum is set for Dec. 5, and Balachandran expects the interior and exterior cases to be filled by then.

“We see the first year of this museum as a work-in-progress,” she said. “We’ll see how people will use the collection and how they teach with it. We’re very excited about making these materials accessible.”