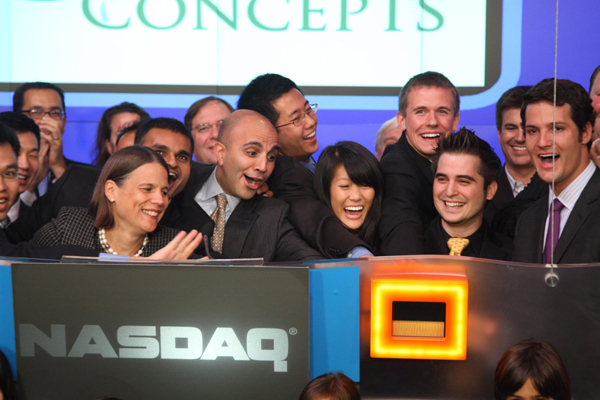 The Johns Hopkins biomedical engineering student team that won the $20,000 grand prize in the 2010 Wharton Business Plan Competition at the University of Pennsylvania received another honor for its invention last week: the opportunity to preside over the NASDAQ Closing Bell. The Cortical Concepts team, which developed a spinal surgery device that increases the strength of fixation in osteoporotic bone, visited the NASDAQ MarketSite in New York City’s Time Square on Aug. 23. The team was formed in the yearlong master’s degree program offered through Johns Hopkins’ Center for Bioengineering Innovation and Design. Its project was sponsored by A. Jay Khanna, an associate professor of orthopedic surgery in the Johns Hopkins School of Medicine, who also attended the NASDAQ ceremony.