Prolific author and historian had taught at university since 1971 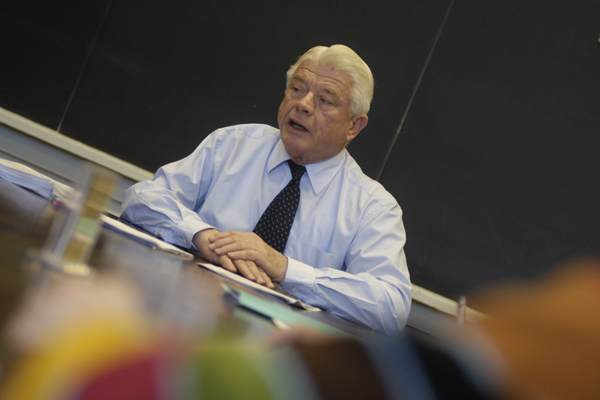 in 2007, John Russell-Wood, the Herbert Baxter Adams Professor of History, meets with his Shipwreck and Empire class. Photo: Will Kirk/Homewoodphoto.jhu.edu

Anthony John R. Russell-Wood, the Herbert Baxter Adams Professor of History at The Johns Hopkins University and a widely published expert in the history and culture of pre-Columbian and colonial Latin America, died Aug. 13 at his Lutherville home after a brief illness.

A faculty member at Johns Hopkins since 1971, Russell-Wood, 70, was a prolific author and one of the world’s foremost historians of Brazil and the Portuguese seaborne empire.

His voracious appetite for knowledge and the impressive breadth of his interests were reflected in his many publications on administrative and urban history, history of art, technology, public health, women, race, slavery and historiography. He wrote or edited 10 books, most recently Slavery and Freedom in Colonial Brazil (2002), and contributed to more than 80 scholarly articles. His eclectic interests led to a teaching portfolio that was just as diverse; he taught graduate seminars on Brazil and colonial Latin America, and undergraduate courses such as The Age of Exploration, The African Diaspora, Shipwreck and Empire, and Gold and Society. His stature within his field of work often led to participation in video and film documentaries shown on National Public Television and the History Channel.

Anthony John Russell-Wood, who was known as John, delighted in teaching and nurturing his students and in guiding graduate-level candidates through their dissertations. Students praised his even-handedness and availability to answer questions or offer support. But he went beyond the classroom, often holding “refugee parties” at his home, inviting students who stayed in town over the Thanksgiving, Christmas and Easter holidays to dine and mingle with his family. His charisma, one family member said, brought both grace and charm to any conversation in which he was a part.

“John was the one colleague you could always count on for help, or turn to for advice,” Rowe said. “He graciously mentored me ever since my own arrival here, as he has so many others thereafter. It is no exaggeration to say that he was loved by us all.”

Russell-Wood served as director of the Krieger School of Arts and Sciences’ Program in Latin American Studies and twice as chair of the History Department. He also contributed significantly to the Center for Africana Studies and served on the Homewood campus’s Academic Council. He won tenure in 1976 and in 2001 was named to the endowed Herbert Baxter Adams Professorship in History.

Michela Gallagher, interim dean of the School of Arts and Sciences, said, “John was held in great affection by his colleagues, students and staff, and he was known for his compassion and his generosity, as well as his wry sense of humor. He will be deeply missed.”

In describing why he chose to become a historian, Russell-Wood wrote in his curriculum vitae that his interest in the discipline was not a case of “love at first sight.” Rather, he said, it was “derived from the gradual realization that many of the sources I was reading on medieval Portugal or the chronicles of the Portuguese in Asia, from the perspective of a student of literature or because of their philological content, possessed a strong historical component which I found irresistible.”

“I am a firm believer in how the study and writing and teaching of history can be highly enjoyable and fun,” he wrote.

Russell-Wood was born in Wales and raised in northwest England’s Lancashire area, where both his mother and father were educators. He earned his bachelor’s degree and a doctorate in modern history from the University of Oxford. He also held a diploma in Portuguese studies from Coimbra University.

Russell-Wood possessed an unrelenting curiosity, a trait he satisfied through constant exploration of the world and people around him. He spent his youth traveling to the far corners of Europe, often relying on his intrinsic good fortune and the benevolence of others to accommodate him. Pursuing his studies, completing academic research and supporting local charitable trusts for indigent education, he spent more than six years living in Brazil.

In raising his sons, Christopher and Karsten, Russell-Wood fostered cultural awareness, strong ethics and a firm command of oneself in all situations that life presents. He took them on trips to his native Wales and encouraged them to expand their horizons by visiting other faraway places. It was while on these trips, as well as at home, that Russell-Wood would instill in his sons the importance of hard work and the value of a strong education. His love of Johns Hopkins contributed to the decision of both sons to pursue undergraduate and graduate experiences at the institution.

Outside the office, Russell-Wood treasured the time he spent with his family and his dog, Abby, a stray pit bull that his wife, Hannelore, had adopted. His interests included cycling, sailing, hiking and bird watching. An avid squash player, he had represented both Oxford University and the United Kingdom in international competitions.

Russell-Wood was also a passionate community volunteer. As chair of the Maryland Committee for the Humanities, he was asked in 1981 to serve on the Maryland Heritage Committee to organize and coordinate Baltimore County’s celebration of the state’s 350th anniversary. In 1983, he received gubernatorial and mayoral citations for public service.

Russell-Wood was awarded numerous honors during his career, including the Portuguese National Order of Knighthood, Commander of the Order of Dom Henrique, presented to him by the president of Portugal; the title of Benemerito, accorded to him by the Santa Casa da Misericordia of Bahia for his contribution to scholarship; Commander of the International Order of Merit of the Misericordias; Officer of the Order of Rio Branco; and honorary citizenship in Salvador, Bahia, Brazil.

Anthony John R. Russell-Wood is survived by his wife of 37 years, Hannelore; his sons, Christopher and Karsten, and their wives; and four grandchildren, Karrigan, Elisabeth, Isabelle and Haviland.