Whiting School of Engineering building is named for Hackerman 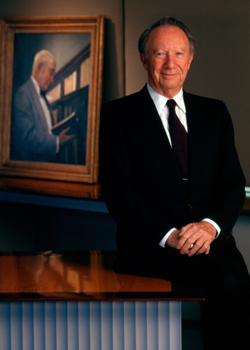 The Johns Hopkins University’s Computational Science and Engineering Building will be named Hackerman Hall in recognition of a lifetime of philanthropic support of the university and its Whiting School of Engineering by alumnus Willard Hackerman.

The building, a headquarters for advanced interdisciplinary research crossing the borders of engineering, computer science, mathematics and medicine, will be dedicated and the name will become official at a ceremony Sept. 15. The honor was conferred by the executive committee of the university’s board of trustees.

Hackerman, president and chief executive officer of Baltimore-based Whiting-Turner Contracting, is a 1938 civil engineering graduate of the university and a former trustee. He led the effort to re-establish the university’s stand-alone School of Engineering in 1979 and was instrumental in securing the school-naming gift in honor of his mentor, G.W.C. Whiting.

“Willard played an absolutely critical role in the re-establishment of a separate school of engineering at Johns Hopkins,” said Nick Jones, the Benjamin T. Rome Dean of the Whiting School. “Beyond that, his dedication, leadership and ongoing commitment to the school have been instrumental in achieving our educational and research mission. We are so fortunate to count him as one of our alumni.”

The building soon to be known as Hackerman Hall opened in 2008 on the new Decker Quadrangle at the southern end of the university’s Homewood campus. It houses some of the Whiting School’s most innovative research programs, including the Institute for

Computational Medicine, the Center for Speech and Language Processing, the Laboratory for Computational Sensing and Robotics, and the Engineering Research Center for Computer-Integrated Surgical Systems and Technology. It includes nearly 80,000 square feet of labs, classrooms, offices and collaboration space.

They funded the Willard and Lillian Hackerman Chair in Radiation Oncology at the Johns Hopkins School of Medicine, construction of the Hackerman-Patz Patient and Family Pavilion, and the Hackerman Research Laboratories at the Sidney Kimmel Comprehensive Cancer Center. They also provided major support for the Robert H. and Clarice Smith Building at the Wilmer Eye Institute.

The Hackermans have been leaders in Baltimore and Maryland civic life and devoted patrons of the arts. Willard Hackerman served on the state’s first Commission on Economic Development and on the Maryland Higher Education Commission. He is a member of the boards of the University of Maryland School of Medicine, the Maryland Science Center and the Baltimore Symphony Orchestra. He has also served on the board of the Maryland Health and Higher Education Facilities Authority. He received an honorary doctorate from Johns Hopkins in 1990 and has honorary degrees from four other educational institutions.

“The contributions of Willard and Lillian Hackerman to this university, the city of Baltimore and the state of Maryland simply cannot be overstated,” said Ronald J. Daniels, president of the university. “Johns Hopkins is delighted and proud that Hackerman Hall will stand on the Homewood campus as a permanent and prominent testament to their dedication, generosity and legacy.”