The merit-based program provides $35,000 to each student for use in the final year of graduate studies. 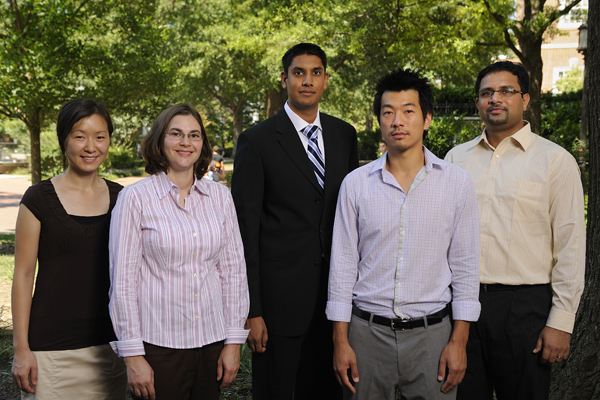 Siebel Scholars Ying-Ying Wang, Ivy Dick, Vikram Aggarwal, Kelvin Liu and Prashant Mali will each receive $35,000 for use in his or her final year of graduate studies.

One graduate student is helping to create high-tech prosthetic hands that can be maneuvered by an amputee’s thoughts. Another is trying to convert ordinary skin cells into more useful stem cells. Still another is working to find signs of cancer in a single DNA molecule in a drop of blood. Yet another is making nanoparticles to carry important medicine past sticky barriers inside the human body.

These are among the ambitious research projects being undertaken by five Johns Hopkins biomedical engineering doctoral students who were this year named recipients of Siebel Scholars awards. The merit-based program provides $35,000 to each student for use in the final year of graduate studies. The Johns Hopkins recipients were among 80 students from prominent graduate schools in the United States and China to be designated as the Class of 2011 Siebel Scholars.

The California-based Siebel Foundation launched the Siebel Scholars program in 2000 to recognize exceptional students at the world’s leading graduate schools of business and computer science. With the Class of 2010, it expanded to include some of the world’s leading bioengineering programs, including those offered at Johns Hopkins. At Johns Hopkins, the Department of Biomedical Engineering is shared by the university’s School of Medicine and its Whiting School of Engineering.

Siebel Scholars are selected by the deans of their respective schools on the basis of outstanding academic achievement and demonstrated qualities of leadership. Siebel Scholars also serve as key advisers to the foundation, guiding the development of innovative programs that it initiates.

“We are honored to be acknowledged as one of the top bioengineering programs and to offer five of our outstanding graduate students entry into a vibrant community of exceptionally talented future leaders,” said Nick Jones, the Benjamin T. Rome Dean of the Whiting School. “The Siebel Scholars program expands our students’ opportunities for entrepreneurship and collaboration, which are themes already integral to our program.”

“Today, more than 600 Siebel Scholars are active in a program that fosters leadership, academic achievement and the collaborative search for solutions to critical societal problems. We welcome these talented individuals to the Siebel Scholars Class of 2011,” said Karen Roter Davis, executive director of the Siebel Scholars Foundation. “Our conference on energy and climate this October, as well as this year’s thought-provoking regional events, will provide immediate opportunities for them to join our active, lifelong community of leaders who are committed to working together with the Siebel Foundation to address critical social issues.”

The Johns Hopkins doctoral students selected as 2011 Siebel Scholars in the bioengineering category are:

• Vikram Aggarwal of Brampton, Ontario. Under the supervision of Nitish Thakor, a professor of biomedical engineering, Aggarwal is working on a way to translate electrical signals from the brain in order to directly control the mechanical movements of hands and fingers in a prosthetic arm. The research is part of a $30.4 million federal project, managed by the Johns Hopkins University Applied Physics Laboratory, to develop new high-tech and highly dexterous mechanical limbs.
• Ivy Dick, of Warren Township, N.J. Under the supervision of David T. Yue, a professor of biomedical engineering, Dick is studying the channels that allow calcium to enter cells. Precise regulation of these channels is vital to maintaining healthy functions such as heart rhythm, memory and motor control. Dick is looking at what happens when this process goes awry in two variants of a disorder called Timothy syndrome. This research may lead to customized treatment of patients with this disorder.
• Kelvin Liu of Arcadia, Calif. Under the supervision of Tza-Huei “Jeff” Wang, an associate professor of mechanical engineering, Liu is developing technology capable of zeroing in on a single DNA molecule within a small sample of blood, urine or other bodily fluids. The molecule can then be analyzed for biomarkers linked to cancer and other health disorders. The goal is to produce a less invasive and less expensive way to conduct important medical tests, including cancer diagnostics and prenatal screening.
• Prashant Mali of Pune, India. Under the supervision of Linzhao Cheng, an associate professor of hematology and a member of the Johns Hopkins Institute for Cell Engineering, Mali is developing techniques to convert easily obtained cells, such as from blood and skin, directly into stem cells that have the ability to form many different types of tissues and organs. To test the process, he is using cells from patients with sickle-cell disease. In addition, he is developing gene therapy tools to enable efficient correction of the cells’ underlying mutation. The goal is to derive autologous disease-free stem cells that potentially may be used to treat patients without triggering rejection.

• Ying-Ying Wang of Northville, Mich. Under the supervision of Justin Hanes, a professor of ophthalmology and nanomedicine, Wang is developing nanoparticles that can quickly carry medications through the sticky mucus secretions that coat many human tissues, including in the lungs, the digestive tract and the reproductive system. Her goal is to produce effective localized treatments and preventive measures for cancer, sexually transmitted diseases and other health problems, with few side effects.