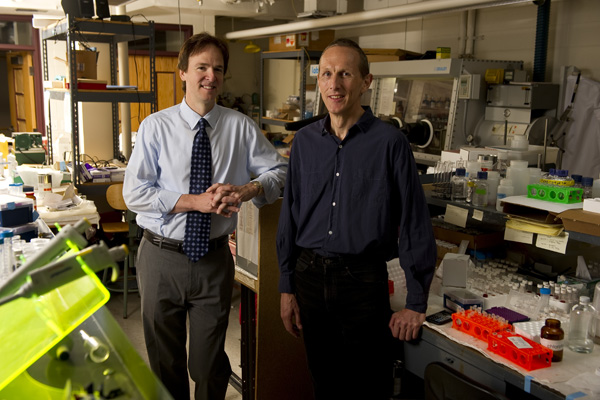 Martin Pomper of the School of Medicine will serve as the center’s co-director, and Peter Searson of the Whiting School of Engineering as its director. Photo: Will Kirk/Homewoodphoto.jhu.edu

Faculty members associated with the Johns Hopkins Institute for NanoBioTechnology have received a $13.6 million five-year grant from the National Cancer Institute to establish a Center of Cancer Nanotechnology Excellence. The new Johns Hopkins center brings together a multidisciplinary team of scientists, engineers and physicians to develop nanotechnology-based diagnostic platforms and therapeutic strategies for comprehensive cancer care. Seventeen faculty members will be involved initially, with pilot projects adding more participants later.

The Johns Hopkins Center of Cancer Nanotechnology Excellence, which is part of the university’s Institute for NanoBioTechnology, is one of several NCI-supported centers launched through a funding opportunity started in 2005. According to the NCI, the program was established to create “multi-institutional hubs that integrate nanotechnology across the cancer research continuum to provide new solutions for the diagnosis and treatment of cancer.”

Peter Searson, who is the Joseph R. and Lynn C. Reynolds Professor of Materials Science and Engineering in the Whiting School of Engineering and director of the Institute for NanoBioTechnology, will serve as the center’s director. The co-director will be Martin Pomper, professor of radiology and oncology at the School of Medicine and the Sidney Kimmel Comprehensive Cancer Center at Johns Hopkins.

“A unique feature of the center is the integration of research, education, training and outreach, and technology commercialization,” Searson said.

To move these new technologies toward use by physicians, a Cancer Nanomedicine Commercialization Working Group will be established and headed by John Fini, director of intellectual property for the university’s Homewood campus. This group will be responsible for managing and coordinating the translational process.

“Validation is about assuring that the experimental products and results we generate are on target and able to measure the biological effects for which they’re intended,” he said.

Searson and Pomper said the center will consist of four primary research projects.

One project will seek methods to screen bodily fluids such as blood or urine for indicators of cancer found outside of the genetic code, indicators called epigenetic markers. Led by Tza-Huei “Jeff” Wang, associate professor of mechanical engineering in the Whiting School of Engineering; Stephen Baylin, the Virginia and Daniel K. Ludwig Professor of Cancer Research in the School of Medicine; and James Herman, a professor of cancer biology in the School of Medicine, this project will use semiconductor nanocrystals, also known as quantum dots, and silica superparamagnetic particles to detect DNA methylation. Methylation adds a chemical group to the exterior of the DNA and is a biomarker frequently associated with cancer.

A second project, led by Anirban Maitra, associate professor of pathology and oncology at the School of Medicine and the Johns Hopkins Kimmel Cancer Center, will focus on curcumin, a substance found in the traditional Indian spice turmeric. In preclinical studies, curcumin has demonstrated anti-cancer properties but, because of its physical size, it is not readily taken up into the bloodstream or into tissues. Engineered curcumin nanoparticles, however, can more easily reach tumors arising in abdominal organs such as the pancreas, Maitra said. This team will try to determine whether nanocurcumin, combined with chemotherapeutic agents, could become a treatment for highly lethal cancers, such as pancreatic cancer.

Hyam Levitsky, professor of oncology at the Johns Hopkins Kimmel Cancer Center, will lead a third project, which will seek to use a noninvasive method to monitor the effectiveness of vaccines for cancer and infectious diseases.

A final project will build on the work of Justin Hanes and Craig Peacock, professors in the School of Medicine, to deliver therapies directly to small cell lung cancer tissue via mucus-penetrating nanoparticles.

All research efforts will be supported by a nanoparticle engineering core, led by Searson, which will make and characterize a variety of nanomaterials. Another core, centering on bioinformatics and data sharing, will be led by Rafael Irizarry, professor of biostatistics at the Johns Hopkins Bloomberg School of Public Health.