APL shapes ‘precursor’ mission for exploration of an asteroid

Lab taps creativity of NASA/APL interns as well as experts 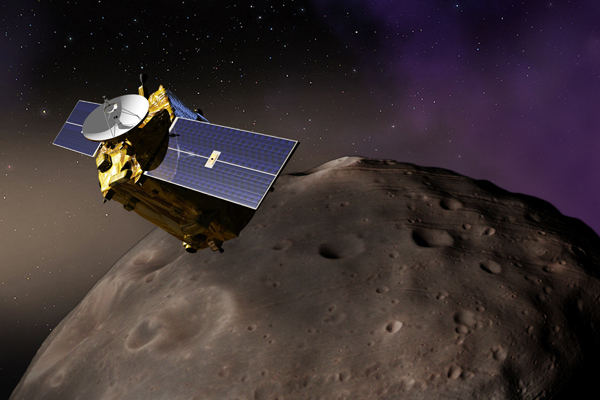 An artist’s illustration shows the Next Gen NEAR spacecraft approaching a near-Earth object. A concept based on the successful Near Earth Asteroid Rendezvous mission, Next Gen NEAR could serve as a robotic ‘precursor’ for a human visit to a near-Earth asteroid. Photo: Applied Physics Lab

Ten years ago, NASA’s Near Earth Asteroid Rendezvous mission made history as the first spacecraft to orbit and land on an asteroid. Now the team behind that successful mission proposes a sequel that could pave the way for astronauts to explore an asteroid for the first time.

Engineers and scientists at Johns Hopkins’ Applied Physics Laboratory have teamed up with NASA’s Goddard and Johnson space flight centers to devise Next Gen NEAR, a concept of a robotic precursor for a human visit to a near-Earth asteroid.

In April, President Barack Obama announced a new direction for the nation’s space program, including plans for NASA to send the first human mission to an asteroid by 2025. This requires building a capability to live and work in deep space, beyond the Earth-moon system. Beyond our moon, asteroids near Earth—called near-Earth objects, or NEOs—are our closest and most accessible planetary neighbors, making them a practical stepping stone for expanded human space exploration.

Only two missions—NEAR and Japan’s Hayabusa—have ever visited and touched the surface of a near-Earth object, and scientists say we need more insight into these objects before we can safely send humans.

“We’ve learned a lot about NEOs using telescopes, Earth-based radar and two robotic missions, but we’d have to get up close and personal with a specific asteroid again, and learn much more about its environment, before we could send human explorers,” said James Garvin, chief scientist at Goddard Space Flight Center. “But there is nothing intuitive about operating at an asteroid. In fact, sending humans to an asteroid would be one of the most challenging space missions ever. So to make sure we really understand that challenge, we’ve paired NASA experts in small-body robotic and human spaceflight with the only team in the U.S. to design, build and operate an asteroid-orbiter mission.”

Planners say that the mission could be ready to launch as soon as 2014 and begin to return data from a target asteroid the following year. The mission’s goal is to collect data on the asteroid’s surface and interior, and to scope out potential resources, as well as hazards to human visitors. “We can’t make these measurements by telescopic remote sensing from Earth or even by spacecraft flyby encounters or distant rendezvous,” said Andrew Cheng, chief scientist in APL’s Space Department, who also served as NEAR’s lead scientist and is on the Hayabusa team.

Experts say that landing on a small body, without an atmosphere or gravity, is completely different from landing on a planet like Mars. Rob Landis, a NASA mission operations specialist, said, “We’ve worked together to design the Next Gen NEAR concept of operations to parallel, to the extent possible, operations of a future human mission.”

Added Paul Abell, of the Johnson Space Center and also a member of the NEAR and Hayabusa science teams, “A mission like this requires extensive science operations from close-in orbit, including contact with the surface.”

The Next Gen NEAR spacecraft would run on commercially available subsystems and carry lightweight scientific instruments (such as a camera, composition-measuring spectrometers and even a surface-interaction experiment) with flight heritage. It would be fitted with solar power, propulsion and communications systems that are compatible with launch on a medium-class rocket toward any one of several targets. It would also have payload capacity to spare for a co-manifested mission, as was done with NASA’s Lunar Reconnaissance Orbiter/LCROSS spacecraft.

“This is a simple, straightforward workhorse of a mission that can launch quickly in 2014, stay within tight cost and schedule constraints, and return the necessary data for less than the cost of a low-risk Discovery-class mission,” Cheng said. “It can provide the critical capability NASA needs for the Exploration Systems Mission Directorate’s new robotic-precursor exploration program even when budgets for such missions are being severely cut.”

The project has captured the spirit of NASA’s Summer of Innovation, with interns at APL playing a key role in the Next Gen NEAR study. Challenged to design an asteroid mission on a capped budget and tight schedule, 15 college interns worked in the APL concurrent engineering design center with senior engineers and scientists from APL, Goddard and the Johnson Space Center. Their innovative mission and spacecraft concepts contributed to Next Gen NEAR. “The experience and results of this study are a win-win for all stakeholders,” said Robert Gold, APL Space Department chief technologist and NEAR mission payload manager.

Daniel Kelly, the systems engineer on the intern team and an aerospace engineering graduate student at the University of Michigan, said, “Everybody was fired up to work on this project. This joint team really clicked.”

NEAR was the first mission to orbit an asteroid and—after a comprehensive yearlong study that yielded more than 160,000 images and measurements of the geology, composition and geophysics of asteroid 433 Eros—the first mission to land on an asteroid’s surface. Designed and built in just 26 months, the car-sized, solar-powered NEAR Shoemaker was one of 64 spacecraft APL has designed, built or operated over the past half-century.