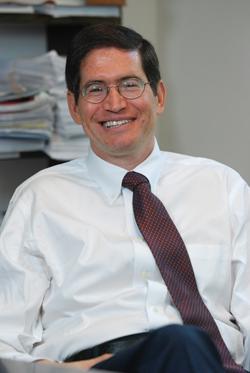 During his talk, “A Skeptical View of Constitution Worship,” Klarman will discuss how our civil rights and civil liberties depend a lot less on the Constitution and courts than one might think.

The forum will take place at 8 p.m. on Thursday, Sept. 16, in Hodson Hall Auditorium on the Homewood campus.

An expert in constitutional law and history with a particular focus on race, Klarman is the Kirkland and Ellis Professor at Harvard Law School, where he joined the faculty in 2008. He received his bachelor’s and master’s degrees from the University of Pennsylvania, his doctorate from the University of Oxford, where he was a Marshall Scholar, and his law degree from Stanford University.

After law school, Klarman clerked for Ruth Bader Ginsburg on the U.S. Court of Appeals for the District of Columbia Circuit. He joined the faculty at the University of Virginia School of Law in 1987 and served there until 2008 as the James Monroe Distinguished Professor of Law and professor of history. Klarman has won numerous awards for his teaching and scholarship, which are primarily in the areas of constitutional law and constitutional history. Klarman has also served as the Ralph S. Tyler Jr. Visiting Professor at Harvard Law School, Distinguished Visiting Lee Professor of Law at the Marshall Wythe School of Law at the College of William and Mary, visiting professor at Stanford Law School and visiting professor at Yale Law School.

His first book, From Jim Crow to Civil Rights: The Supreme Court and the Struggle for Racial Equality, was published by Oxford University Press in 2004 and received the 2005 Bancroft Prize in History. He published two books in the summer of 2007, also with Oxford University Press: Brown v. Board of Education and the Civil Rights Movement and Unfinished Business: Racial Equality in American History, which is part of Oxford’s Inalienable Rights series. In 2009, Klarman was inducted into the American Academy of Arts and Sciences.

The 2010 Constitutional Forum is supported by the George Huntington Williams Memorial Lectureship, which honors Johns Hopkins’ first professor of petrology. A pioneer in the microscopic study of rocks and minerals, Williams in the late 1880s founded what was then called the Department of Geology (now Earth and Planetary Sciences). In 1917, his family created an endowment in his memory for lectures by distinguished public figures on topics of widespread contemporary interest. Speakers have included Archbishop Desmond Tutu and Russian President Boris Yeltsin.

Klarman’s talk celebrates Constitution Day, Sept. 17, the day in 1787 when delegates convened in Philadelphia to sign the U.S. Constitution. Additional information about Constitution Day may be found by searching the website of the National Archives, www.archives.gov.

The 2010 Constitutional Forum at Johns Hopkins is sponsored by the Department of Political Science and the Office of Government, Community and Public Affairs.