Serving up dinner and discourse 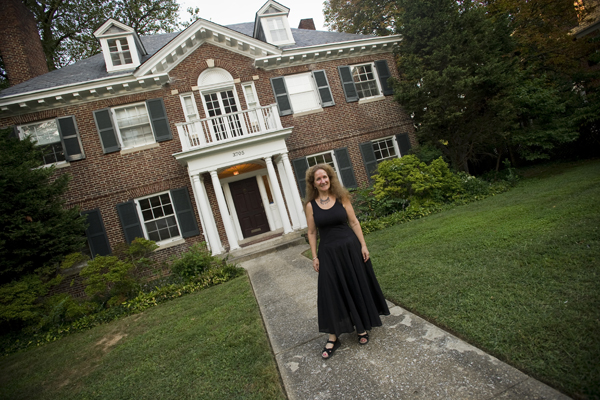 Tonight, KSAS Dean Katharine Newman opens the doors of her new home to the first of 800 Homewood undergraduates she expects to entertain at two series of informal dinner-and-discussion programs this year. Photo: Will Kirk/Homewoodphoto.jhu.edu

Guess who’s coming to dinner? If you’re Katherine Newman, the answer is 800 undergraduates.

That’s the number of students the new James B. Knapp Dean of the Krieger School of Arts and Sciences expects to welcome to her home throughout the 2010–2011 academic year, thanks to two informal dinner-and-discussion programs pairing distinguished Krieger School faculty and Homewood students.

The first 75 undergraduates will visit Newman’s North Charles Street home this week through the Four-Course Dinners program, now in its third year of bringing together faculty and students from both the Krieger and Whiting schools for casual conversation about a variety of topics in the humanities. Monday, Tuesday and Wednesday will mark the first dinnertime sessions of the noncredit four-week courses on the Bible, Yiddish humor and European film.

Next week, 40 more undergraduates will visit Newman’s house through the Zelicof Family Dinners with the Dean, a new program offering students and their professors who are in for-credit Krieger School courses a chance to get together outside the classroom.

“My feeling about these programs is that they do some of what we are trying to encourage more of at Hopkins, to have informal fun meetings with professors, especially in the humanities, where professors can speak passionately about something that they know about,” said Steven David, vice dean for undergraduate education.

“In the case of the Four-Course Dinners,” he said, “it’s often with students who are not majoring in that area to expose them to something new, to expose a biology or biophysics major to film or political science or Jewish humor. It’s all about good food and good conversation in an informal setting.”

The Monday sessions of the Four-Course Dinners are full with 25 students, and the other two nights are nearly at capacity, said Jaclyn Cohen, program coordinator for the Four-Course Dinners. Students can e-mail Cohen at fourcoursedinners@jhu.edu to sign up for the remaining spots. Cohen said they are capping the events to ensure they are conducive to interaction.

“The students really want to discuss and learn together, not simply listen to lectures,” said Cohen, a graduate student in Spanish in the Department of German and Romance Languages and Literatures. “The goal is to reach out to any undergraduate at Hopkins. The main point of the program is to spark an interest in the humanities, so I have advertised it to the Whiting School as well. Last semester, we did have a lot of engineering students attend, and they loved it.”

The schedule for the Zelicof Family Dinners with the Dean is still being finalized, but the first group—students of David’s, a political science professor—will call on Tuesday, Sept. 21.

Both the Four-Course Dinners and the Zelicof Family Dinners with the Dean are funded by Caren Zelicof, who earned her bachelor’s degree from the Krieger School in 1986, currently serves on the Alumni Council and is a national chair emeritus of the Second Decade Society, the school’s alumni leadership development organization. When Zelicof marked the end of her tenure as chair of the society with a donation to the university, Paula Burger, then dean of undergraduate education, suggested using the funds to experiment with initiatives to create a more robust sense of community on campus, and the Four-Course Dinners program was born, said Monica Butta, director of the Second Decade Society.

Recently, when Zelicof made a new donation to mark her 25th anniversary as a Johns Hopkins alumna, Newman, who is such a big fan of the Four-Course Dinners that she wanted to host some of the gatherings in her home, suggested the creation of the Zelicof Family Dinners with the Dean.

Newman said that both dinner programs give undergraduates something they crave: more one-on-one time with their professors, and a greater sense of community. The same factors motivated the dean to want to live in a nearby neighborhood.

“I chose this home because it’s so close to campus, and it’s huge,” Newman said. “I moved into it because what I was looking for was an opportunity to open up my home to students and faculty to increase the interaction between the two populations. I want everyone to think of my home as a people’s house.”