Engineering and Computational Sciences Building gets a new name 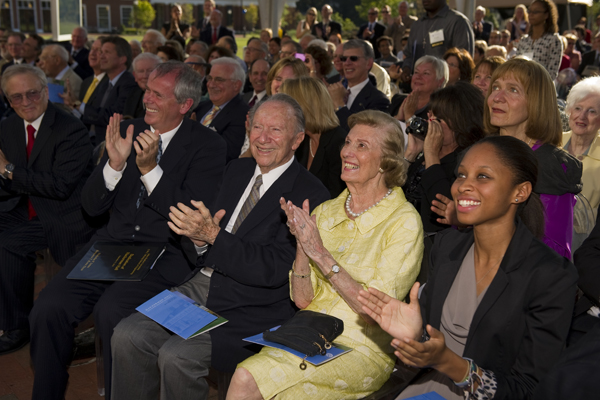 Dean Nick Jones, Willard Hackerman, Lillian Hackerman and graduate student Britni Lonesome, a Baltimore Polytechnic Institute alumna and one of the speakers, at the dedication. Photo: Will Kirk/Homewoodphoto.jhu.edu

Students, faculty members and friends gathered last week on the Homewood campus to celebrate the renaming of a high-tech research building to recognize the philanthropic support of the university by alumnus Willard Hackerman.

The Computational Science and Engineering Building, which opened on the Decker Quad in 2008 as a headquarters for advanced interdisciplinary research crossing the borders of engineering, computer science, mathematics and medicine, was rededicated as Hackerman Hall.

Hackerman, 91, and his wife, Lillian Patz Hackerman, 90, have been ardent Johns Hopkins supporters, establishing scholarships for graduates of Baltimore Polytechnic Institute to attend Johns Hopkins, funding faculty chairs in the School of Medicine and the Whiting School of Engineering, and supporting several university research centers.

Hackerman, president and chief executive officer of Baltimore-based Whiting-Turner Contracting Co., is a 1938 civil engineering graduate of the university and a former trustee. He led the effort to re-establish the university’s stand-alone engineering school in 1979 and was instrumental in securing the school-naming gift in honor of his mentor, G.W.C. Whiting.