2006 National Academy of Engineering inductee nearly two decades at Johns Hopkins, passed at the age of 77 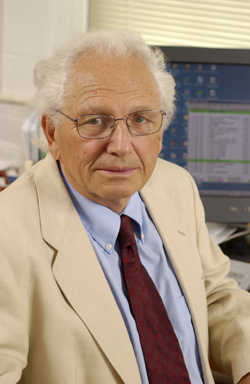 Frederick Jelinek, a Johns Hopkins University faculty member whose research laid the foundation for modern speech recognition and text translation technology, died on Sept. 14 while working at the Homewood campus. He was 77.

During 21 years at IBM Research and nearly two decades at Johns Hopkins, Jelinek pioneered the statistical methods that enable modern computers to “understand,’’ transcribe and translate written and spoken language. In recognition of this work, he was inducted in 2006 into the National Academy of Engineering.

“He envisioned applying the mathematics of probability to the problem of processing speech and language,” said Sanjeev Khudanpur, a Johns Hopkins associate professor of electrical and computer engineering who worked with Jelinek. “This revolutionized the field. Fifty years ago, no one thought that was possible. Today, it’s the dominant paradigm.

“Initially,” Khudanpur added, “Fred’s ideas generated some hostile reviews, owing to philosophical differences, but ultimately his approach prevailed and became mainstream. Over the past 10 years or so, he received lifetime achievement awards, one after another, from diverse professional societies.”

At Johns Hopkins, which he joined in 1993, Jelinek was the Julian S. Smith Professor of Electrical Engineering and director of the Center for Language and Speech Processing. The center is based in what was then known as the Computational Science and Engineering Building, where Jelinek died while concluding his workday. The cause of death was not immediately determined.

The following day, faculty members and friends of the Whiting School of Engineering gathered for a previously scheduled ceremony during which the building was renamed Hackerman Hall, in honor of university benefactor Willard Hackerman. Nick Jones, the Benjamin T. Rome Dean of the Whiting School, asked the attendees to observe a moment of silence to pay tribute to Jelinek, saying that he was “a respected colleague and will be greatly missed.”

“I think that this afternoon, as we consider the significance of this building and what it means to our community, it is important to note that a scholar of Fred’s distinction resided here,” Jones said. “It is a testament to what this building is about that a world-renowned researcher such as Fred thrived, mentored, taught and created knowledge here.”

Speaking later with The Gazette, another Johns Hopkins colleague, Jason Eisner, recalled Jelinek as lively, witty, cultured and intellectually curious. “He was a real straight shooter—no politics, no varnish—and a man of his word,” Eisner, an associate professor of computer science, said. “He was known for his strong personality, yet he was always ready to acknowledge counterarguments or concede points, and he was generous in his praise.”

Jelinek was born near Prague in what is now the Czech Republic. In 2001, when he accepted an honorary doctorate from Charles University in Prague, Jelinek recalled his difficult childhood.

“When I completed second grade,” he told the audience, “a Nazi edict prevented us Jews from further school attendance. We were taught the subjects of the third and fourth [grades] privately in small, constantly changing groups. My classmates as well as my teachers were being progressively sent to various concentration camps. … Beginning with the summer of ’42, all instruction was forbidden.”

During the Nazi occupation, Jelinek’s physician father died of typhoid in the Terezin concentration camp. Fearing that the Communist regime would not allow her son to advance his education, Jelinek’s mother emigrated after the war to New York with him and his sister.

Engineering was not Jelinek’s first career choice. “My mother wished for me to become a physician, just like my father,” he said in his 2001 speech. “My parents planned to have me educated in one of England’s famous public schools. To teach me German, they engaged a German governess. I myself wanted to be a lawyer, defender of the unjustly accused. But my career is the result of political circumstances, academic possibilities and lucky accidents.”

In New York, Jelinek discovered that an engineering degree could be obtained in four years, while becoming a lawyer would require seven. He also worried that his foreign accent would hamper his success in the courtroom. “So I took up electrical engineering in the Evening Session of the City College of New York, having shown no previous inclination toward that profession,” he said.

Eventually, he succeeded well enough in his studies to gain acceptance to MIT, where he earned his bachelor’s and doctoral degrees in electrical engineering. “Fortunately,” he said, “to electrical engineering there belonged a discipline whose aim was not the construction of physical systems: the theory of information.”

After obtaining his doctorate in 1962, Jelinek joined the faculty of Cornell University, where he continued to study information theory. A decade later, he applied for a summer position at the IBM T.J. Watson Research Center. Soon he was appointed to head the center’s large Continuous Speech Recognition group on a full-time basis.

“Our group completely revolutionized the standard approach to speech recognition,” Jelinek said in his 2001 speech. “This was made easy by the fact that practically none of us was educated in any subject related to speech. Those who contributed most had their doctorates in information theory or physics. Their creativity, determination, originality and courage to risk was what accounted for our success.”

Jelinek’s son, William Jelinek, said his father “was extremely proud of the speech recognition group he led at IBM for 21 years. When he retired from IBM in 1993, he wanted to continue to do research, and Johns Hopkins gave him the opportunity when the school asked him to direct the Center for Language and Speech Processing there.”

At Johns Hopkins, his colleagues said, Jelinek was able to build upon his groundbreaking work at IBM and share it with students and other faculty members. He led highly regarded summer workshops that brought together speech and language processing researchers from industry, government and academia, along with undergraduate and graduate students. “These workshops helped a lot of people get their start in this field and led to many great research collaborations,” said Eisner, the computer science professor.

A funeral service for Jelinek was held Friday at Sol Levinson & Bros. in Pikesville, Md. William Jelinik said that the family plans to conduct memorials and remembrances in the coming months in Baltimore, New York and Prague to allow colleagues and friends to celebrate his father’s life.

In addition to his son, of Briarcliff Manor, N.Y., Frederick Jelinek is survived by his wife, Milena Jelinek, a Czech filmmaker who teaches screenwriting at Columbia University; his daughter, Hannah Sarbin, of Larchmont, N.Y.; his sister, Susan Abramowitz, of Montreal, Canada; his half-sister, Jirina Hlavac, of Zurich; and grandchildren Alex Sarbin, Sophie Jelinek and Benjamin Jelinek.

Family members said that contributions in memory of Frederick Jelinek may be sent to the American Jewish Joint Distribution Committee, to be directed to the Prague Jewish Community, P.O. Box 530, 132 E. 43rd St., New York, NY. 10017.