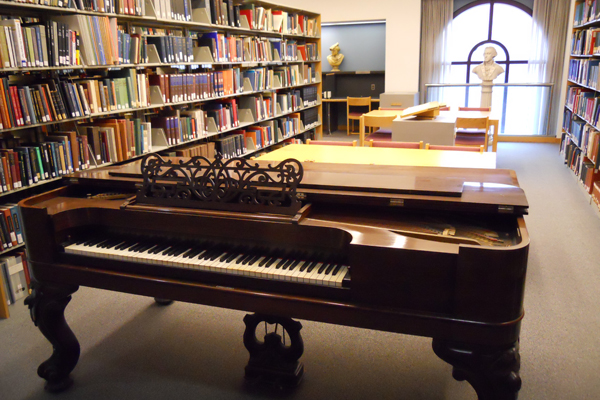 To celebrate the 20th “birthday” of Peabody’s Arthur Friedheim Library, the public is invited to an open house at 2 p.m. on Saturday, Sept. 25, during the Baltimore Book Festival on Mount Vernon Place. Remarks by Peabody Institute Director Jeffrey Sharkey and new head librarian Jennifer Ottervik will be followed by birthday cake.

The state-of-the-art facilities for the music library were made possible by a $2 million gift from Eric Friedheim, for many years the owner and editor of Travel Agent magazine. In recognition of this gift, then the largest single donation in Peabody’s history, the library was named for his father, a student of Franz Liszt. Also opened in 1990 as part of the Friedheim Library were the P. William and Vera Ruth Filby Rare Book Room, the Joseph Meyerhoff Reading Room and the Marbury Room, a conference room on the second floor.

Born in Saint Petersburg, where he studied with Anton Rubinstein, pianist Arthur Friedheim (1859–1932) left Russia in 1878 to study with Liszt in Weimar. Though he continued to teach and compose, his celebrated career as a performer essentially ended with World War I and the associated anti-German sentiment.

Friedheim’s son Eric (1910–2002), born in London and raised in Germany and the United States, became Washington correspondent and aviation editor for the International News Service, then enlisted in the Army Air Corps after Pearl Harbor. In 1973, during his years with Travel Agent, he was the first American travel writer to report from the People’s Republic of China.