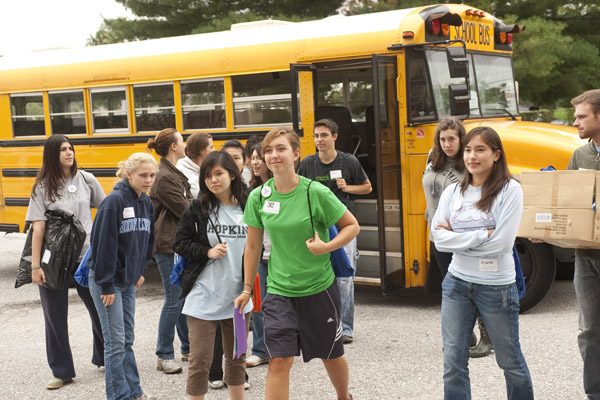 A large convoy of Johns Hopkins affiliates will venture out on foot and bus from the Homewood campus on Saturday to collectively give back to Baltimore.

Nearly 900 students, staff and faculty are registered to participate in the second President’s Day of Service, a one-day event featuring more than 40 service projects across the city.

In years past, the Center for Social Concern hosted Involved: the Freshman Day of Service, an event held during orientation that sent Homewood freshmen into schools, community centers, parks and homeless shelters in Baltimore.

Last year, President Ron Daniels asked the entire Johns Hopkins community to participate in a day of service to coincide with his inauguration weekend. Nearly 1,000 volunteers organized by the Center for Social Concern worked in 45 service sites around Baltimore, including Daniels, who helped paint a school library in Hampden and plant a community garden in the Remington neighborhood.

This year’s event features the theme “One Hopkins, One Baltimore” and seeks to illustrate the transformative power of collective action and the positive change Johns Hopkins can generate in the community.

Volunteers will help mentor children at local schools, clean and paint homeless shelters, work at soup kitchens, plant gardens, clean streams and contribute to a host of other projects.

One group of 50 students will travel to Freeland, Md., to work at First Fruit Farm, a nonprofit ministry dedicated to growing fresh vegetables to help feed the hungry in Baltimore. Since 2004, the farm has provided more than two

million pounds of fresh produce to people in need.

Another group of volunteers will go to Sarah’s House, a supportive housing program for transitioning homeless families, to lead arts and crafts projects with the facility’s youth population. A dozen students will travel to the Reservoir Hill area to participate in a large-scale landscaping project to create gardens and green spaces in the community.

The Homewood caucus of the Johns Hopkins Black Faculty and Staff Association will sponsor a project for the Children of the Dream Outreach Initiative in Howard Park, an outreach program geared to children in grades one to five that offers after-school programming in the West Baltimore community. Roughly 40 volunteers representing three caucuses of the BFSA—Homewood, East Baltimore and the Applied Physics Laboratory—will fan out across the community and let residents know about the new initiative and how to access the services.

Shameek Robinson, chair of the Homewood caucus and an educational adviser at the Center for Talented Youth, said that the BFSA wanted to show its support for both community service and the president’s “one university” efforts.

“We thought this was an important way for the BFSA to collectively participate in a project that seeks to revitalize an area of the city,” he said.

Gia Grier McGinnis, the assistant director of the university’s Center for Social Concern, said that the big change from last year’s event was the creation of a 12-person student planning committee to help coordinate the projects.

“There was a lot of support to make this a student-run event and get more upperclassmen involved. Last year nearly half of the participants were freshmen,” said McGinnis, who advises the student committee and serves as staff director of the Day of Service. Moving the event from the first week of classes to Oct. 2, she said, gave the committee an entire month to recruit students, faculty and staff, and just get the word out.

The result, McGinnis said, is a more diverse group of volunteers with representation from all undergraduate years, graduate students and faculty and staff.

McGinnis said that the hope is that the projects spark interest in volunteering and expose participants to the needs of the community.

“It’s about creating awareness to the challenges that people in the community face,” she said. “Ideally, we would like them to stay involved and delve deeper into volunteer work during their time at Johns Hopkins.”

The volunteers will work from 1 to 4 p.m. and then return to Homewood for a post-service party.

The event kicks off at noon at the O’Connor Recreation Center with opening remarks from President Daniels.

Registration is closed, but a sign-up form for the waiting list is available at www.jhu
.edu/csc/events/presidentsdayofservice
.shtml.