Johns Hollywood: We play Harvard in the Facebook movie

'The Social Network,' which had some scenes filmed at Homewood, hits screens over the weekend 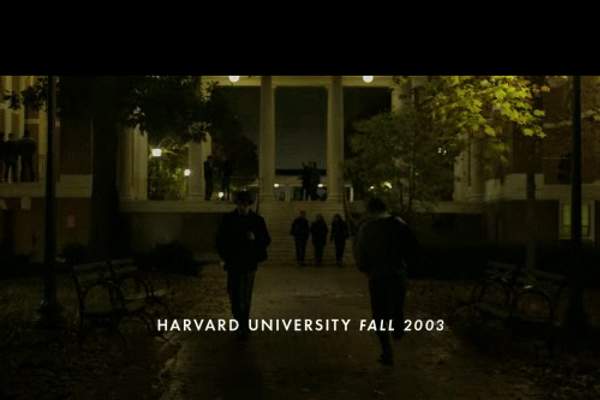 Scene from 'The Social Network' filmed at Johns Hopkins University.

An undergrad with a mop of hair and a heavy backpack is running across an idyllic quad at nightfall. As the scene unfolds on the big screen, the campus’s glowing lampposts, red brick pavers and white columns look really familiar, even though a subtitle says “Harvard University Fall 2003.”

That’s because what we’re really looking at is “Johns Hopkins University Fall 2009,” when Hollywood came to Homewood to shoot The Social Network, the new Columbia Pictures film chronicling the founding of Facebook. In the film, written by The West Wing’s Aaron Sorkin and directed by Fight Club’s David Fincher, Homewood masquerades as Harvard, where the ubiquitous website’s creators were students.

When watching The Social Network, which opened this weekend, those familiar with the university’s Homewood campus will have no trouble recognizing several iconic spots captured on film during two nights and one day last November. The crew filmed scenes on the Keyser and Wyman quads; behind AMR I, Remsen and Mergenthaler halls; and on the walkway between Rogers House and University Baptist Church.

Johns Hopkins students who attended a special sneak preview last week said there was no mistaking whose campus had a starring role.

“Everyone freaked out any time Hopkins was on screen,” said Mary Katherine Fanning, a junior majoring in political science in the Krieger School. “The whole crowd cheered when the mini-breezeway between Mergenthaler and Remsen was shown.”

“Every time Hopkins came on the screen, the room filled with chuckles and whispering,” said Beharie, who is majoring in public health studies with a minor in psychology. “You would know that it was part of Homewood with your eyes closed.”

Both Fanning and Beharie said they could easily see snapshots of their own campus experiences through the film’s geography. Beharie said that when actor Jesse Eisenberg, who plays Facebook founder and CEO Mark Zuckerberg, ran up the stairs of the fictionalized version of Harvard’s Kirkland House, it called to mind her daily adventures running to math classes.

In fact, running—not just architecture—might be emblematic of Johns Hopkins.

“The run across the quads at night was horribly familiar,” Fanning said. “I kept waiting for Jesse Eisenberg to get hit by the sprinklers.”

The production came to Homewood because Harvard doesn’t allow commercial filming, which it deems “disruptive to campus life.” So Bill Doyle, the lead location scout and location manager for The Social Network, sent out a casting call for a similarly bucolic stand-in for the Ivy. Enter Jack Gerbes, director of the Maryland Film Office, who had worked with both Doyle and Johns Hopkins on other projects. Gerbes previously had brought production crews to Homewood for films such as Invasion, starring Nicole Kidman; Head of State, starring Chris Rock; and Something the Lord Made, an HBO production in which Homewood stood in for another part of Johns Hopkins, playing the medical institutions campus in East Baltimore. Occasional scenes from David Simon’s Homicide and The Wire also were shot at the university.

“There are two things that bring film crews to Hopkins a lot,” Gerbes said. “First is the great style—it’s a stereotypical institution with the bricks and the pillars and the quads, certainly. But just as important as the look is the cooperation and film-friendliness. There’s a spirit of cooperation, hospitality, almost proactivity when we approach Hopkins.”

Leading the film-friendly charge is Dennis O’Shea, executive director of Communications and Public Affairs at Johns Hopkins, who works with the location managers and production teams to find the right shots and to schedule shooting when it is minimally disruptive. Welcoming productions to campus is fun for the students, faculty and staff, he says, but also good for the community, providing work for local film crews, actors and extras.

“As a bonus, during the Social Network shoot, David Fincher, Jesse Eisenberg and [co-star] Andrew Garfield generously spent time with students and faculty from our Film and Media Studies Program,” O’Shea said. “A film shoot is a crazy-making logistical nightmare, involving folks from Plant Operations, Security, Parking, Scheduling, my office and many others. And we can’t always say ‘yes’ to Hollywood, because the academic mission of the university comes first. But, in the end, when we can do it, it’s fun and it’s good for almost everybody.”

O’Shea said that inviting The Social Network to campus also offered a chance for the university to capture a little screen time, even if Harvard gets the credit.

But at least one student didn’t think that Harvard could actually claim Homewood’s good looks as its own.

“The campus looked great on the big screen. However, Homewood could never ‘fill in’ for Harvard,” Beharie said. “Our school is beautiful on its own, and it is too bad that millions of people will now think that Harvard really looks like the Homewood campus.”