Learning from ‘The Wire’ 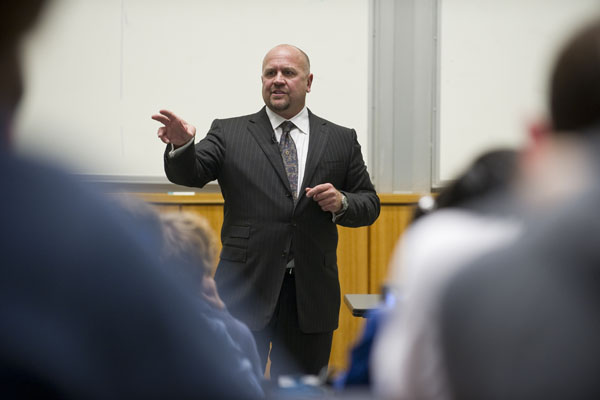 Though it’s located in Baltimore City, the verdant and well-manicured Homewood campus seems a world away from the gritty drug corners and public housing projects that form the backdrop for the groundbreaking, critically acclaimed five-season HBO drama The Wire.

But inside a classroom in Hodson Hall, a group of undergraduates is immersing itself in that other world, thanks to a new public health studies class called Baltimore and The Wire: A Focus on Major Urban Issues.

Created and taught by Peter Beilenson, former Baltimore City health commissioner and current Howard County health officer, the course uses the fictional but highly realistic world of the former TV series as a lens through which to view major issues confronting not only Baltimore but also other major American urban centers, such as Detroit, Philadelphia and Los Angeles.

“The world depicted in The Wire may seem like fiction to most of you, but in truth it is a frighteningly accurate portrait of life in some parts of Baltimore—the city in which you are sitting right now—and in many other cities through the United States,” said Beilenson, who was Baltimore City health czar for 13 years under two mayors, Kurt Schmoke and Martin O’Malley, on the first day of class. “We’re talking about poverty; the war on drugs and the illegal drug trade; city governments and their bureaucracies and how those work, or don’t; politics; the police, the courts and criminal justice; homelessness; and education. This series tackles them all in a very thoughtful, interesting and realistic way,” he said.

Offered through the Undergraduate Program in Public Health Studies, the three-credit course uses the landmark series as a moving-picture textbook stuffed to the brim with relevant and compelling case studies about those issues. Students are assigned to watch all five seasons of the series outside of class, so that the drama serves as a cornerstone for in-class discussions. The urban challenges are further elucidated through weekly lectures by a lineup of regional speakers that reads like a Who’s Who of urban policymakers.

“My idea was that instead of just having students read in a book about the problems plaguing modern American urban centers, they could watch them played out in The Wire and then hear them discussed and dissected by leading experts who are working to address those problems,” explained Beilenson, an alumnus of the Bloomberg School of Public Health who also lectures there and at the School of Medicine. “This gives the students an opportunity not only to hear from these policymakers but also to ask them questions and engage with them in a real way. My goal is for them to realize the depth and breadth of these problems and to understand that there are no easy answers here.”

In early September, for instance, Beilenson used his own experience and expertise to introduce the class to urban drug problems and the so-called war on drugs. Later, Lamont Coger, who used to direct the Baltimore Needle Exchange Program, discussed drug harm–reduction programs, including needle exchanges.

Steve Teret, of the Bloomberg School of Public Health’s Center for Gun Policy and Research, has talked to the students about the role that guns and drugs play in crime and violence, and Jessamy and Schmoke, now dean of Howard University Law School, are on the schedule for mid-October. Jessamy will address the juvenile justice system and alternative approaches to juvenile detention, and Schmoke will offer, according to the syllabus, “A primer on how big city politics work and how things get done.” In November, Alonso will talk to the class about the challenges facing urban education and his attempts to reform the Baltimore City Public School System.

Last week, Norris offered the students an entertaining and informative 75 minutes recounting his years in the New York and Baltimore City police departments, fighting the kinds of crime so accurately and vividly depicted in The Wire.

“I was a cop for 24 years, and I will tell you that, without a doubt, The Wire is the most realistic police drama I have ever seen,” said Norris, who joined the Screen Actors’ Guild after appearing as a detective in 22 episodes of the television series. “The stuff that [series creator David] Simon criticized through the show, well, it was all true. You will learn a lot about the good and bad of the city you are living in through watching that show.”

Norris told the students that, despite vast improvements in managing crime in Charm City, Baltimore remains “a real tale of two cities: There is affluence side by side with great poverty. That world you see in The Wire? It’s the real thing.”

Beilenson said he hopes that by the end of the course students will have a different and more multifaceted—and sophisticated—perspective on urban ills.

“There’s a temptation by people to look at some of these problems that afflict our cities—like kids dropping out of school and drug use and criminal behavior—and think, Well, why don’t those people just stay in school and pull themselves up by their bootstraps?” he said. “But once you take a more comprehensive and deeper look at the situations that cause these things to happen, and how entrenched they are, it becomes obvious that there are no quick fixes.”

Adam Epstein, a sophomore majoring in the Writing Seminars and history, said, “I enrolled in this class because I was obsessed with The Wire, which might be one of the greatest and most important television series of all time and deserves to be discussed in an academic setting. The course has been great. It’s been fascinating listening to different people involved with Baltimore politics. You know some of the people that come to talk to us are prominent when they have a Wikipedia page,” he said.

“The course has definitely changed my perception of urban problems. They are much more prevalent than I had considered, especially violent crime,” he said. “I was surprised to learn that for as many problems Baltimore has had with drugs and crime, it is often a pioneer city in creating new and innovative methods to combat those problems.”