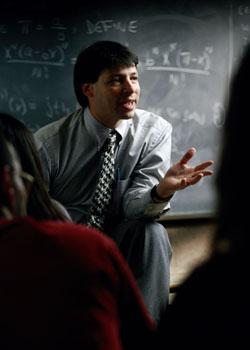 Arthur T. Benjamin, a California college professor who has entertained audiences on national television and at numerous events by performing “magic” tricks with numbers, will present a show this week on the Homewood campus.

Benjamin, who performs as the Mathemagician, will appear at 7 p.m. on Thursday, Oct. 7, in 110 Hodson Hall.

As part of his act, Benjamin multiplies large numbers in his head in a matter of seconds, and when audience members provide their birth dates, he can immediately identify the day of the week on which they were born. At the end of his show, Benjamin reveals how he accomplishes his mental math tricks.

Earlier this year, Benjamin performed some of these tricks on television’s The Colbert Report. He also has taken his act to many science festivals, conferences and other events. Some of his strategies are detailed in his book Secrets of Mental Math.

Benjamin is a professor of mathematics at Harvey Mudd College in Claremont, Calif. His visit to Johns Hopkins will represent a homecoming. In 1989 he earned his doctoral degree in applied mathematics from the Whiting School of Engineering. His doctoral adviser was Alan J. Goldman, who died earlier this year. Benjamin was invited to return to Johns Hopkins this week to deliver the annual Goldman Lecture (see Calendar), funded in honor of his mentor.

Upon learning that the Mathematician was coming to Homewood, members of the Hopkins Undergraduate Society for Applied Mathematics asked Benjamin if he would also present his magic show on campus. Rachel Kloss, president of the organization, said Benjamin agreed to perform without charge.