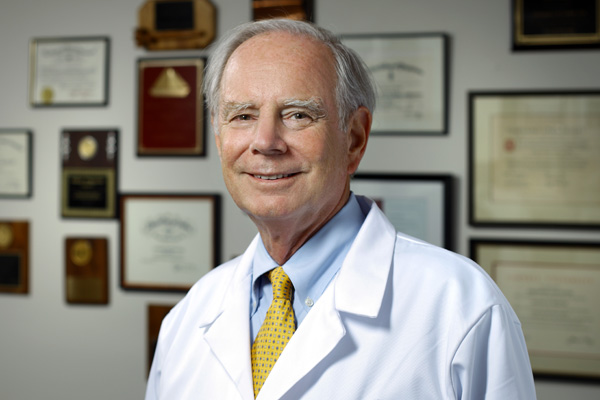 Christopher Dyer Saudek, founder and director of the Johns Hopkins Comprehensive Diabetes Center, a pioneer in the development of implantable insulin pumps and a tireless physician who was ever available to his patients, died Oct. 6 after a battle with metastatic melanoma. He was 68.

A member of the Johns Hopkins faculty for 30 years, Saudek was a prolific researcher and devoted educator as well as a beloved clinician who earned a national and international reputation for his efforts to spread the message that healthy living habits often prevent diabetes and, when the disease is present, limit its complications.

“We have lost one of our giants,” said Edward D. Miller, dean of the School of Medicine and CEO of Johns Hopkins Medicine. “He always tried to make things better for patients. I so enjoyed referring patients to him because I knew that he would not only give them great medical care but that his compassion and understanding of the human condition was unsurpassed. Chris was the best that Hopkins had to offer.”

“Chris’ passing is a tremendous loss to the Hopkins family,” said university President Ronald J. Daniels. “From a very personal perspective—as president, as a colleague and as one of his patients—I cherished my interactions with Chris. His humanity, decency and his excellence were nothing less than inspirational for those of us who had the privilege to know him.”

Saudek, an endocrinologist, founded the Johns Hopkins Comprehensive Diabetes Center in 1984. A national leader in the field, he served as president of the American Diabetes Association from 2001 to 2002. In that role, he launched a nationwide educational campaign to raise public awareness of diabetes’ link to heart disease and stroke. His efforts garnered cover stories in both Time and Newsweek; inspired the first-ever issue of the Journal of the American Medical Association devoted entirely to diabetes; and prompted Tommy Thompson, then U.S. secretary of health and human services, to make diabetes prevention and management a top priority.

Although he was the author of a respected diabetes guide and a well-traveled lecturer on the disease, its complications and how to prevent them, most important to Saudek were his patients. According to colleagues and family members, he made time to see his patients each week, no matter how busy he was. He considered himself a personal diabetes educator to each of them, teaching about the disease so they could better care for themselves.

“The main challenge in successfully managing diabetes is to find the key to each individual’s self-care,” Saudek once said. “People with diabetes need to have the motivation and the knowledge to treat themselves hour by hour, day by day and year by year. This is why diabetes education is so important.”

In 2007, Saudek’s passion for patients took him to the South Caribbean island nation of Trinidad and Tobago, where he was the driving force behind a Johns Hopkins initiative designed to teach medical professionals in that country—where an estimated 20 percent of the population has diabetes—how to improve care for diabetes patients and better spot potential complications early enough to do something about them.

In a video that Johns Hopkins produced last year about the program, Saudek said that the effort was exciting “because it really is an opportunity to affect the health care of a nation.”

“It’s a small nation, a nation that’s very burdened by diabetes. Their problem is huge, their expenses are huge in taking care of people with diabetes, and we think we can help,” he said.

The success of that program has led Johns Hopkins officials to explore expanding it to other nations.

“He was very committed to training young physicians in the proper care of diabetes worldwide,” said Myron Weisfeldt, director of the Department of Medicine at the Johns Hopkins University School of Medicine.

Over the course of his career, Saudek saw once-rare type 2 diabetes explode into an epidemic, with millions suffering from it and millions more considered pre-diabetic due to unhealthy diet and lack of exercise.

The Hugh P. McCormick Family Professor of Endocrinology and Metabolism in the medical school, as well as a member of the faculty of the Johns Hopkins Bloomberg School of Public Health, Saudek was educated at Harvard and at Weill Cornell Medical College. Before coming to Johns Hopkins, he was a fellow at the National Institutes of Health and the Robert Wood Johnson Foundation.

For more than 20 years he was program director of the Johns Hopkins General Clinical Research Center, a National Institutes of Health–funded grant that supports clinical investigation.

In his own research, Saudek focused on the development of an implantable insulin pump that would enable a diabetic to get the right dose of insulin without having to use injections. These devices went beyond the external pumps that are attached to a catheter inside the body and are used to aid in injecting insulin.

Saudek published widely on the topic and dreamed of creating what would essentially be an artificial pancreas, an insulin pump implanted in the body that would measure a diabetic’s blood glucose and deliver the correct insulin dosages for maintaining blood sugar at a constant level. He saw a future in which patients would no longer have to prick their fingers many times a day to test blood sugar or give themselves injections of insulin.

In the 1980s, Saudek implanted one of the first internal insulin pumps, and the diabetic patients who had the early pumps swore they changed their lives. Although the device was never approved by the FDA, Saudek’s research laid the groundwork for other exciting advances in the field. “His work with the insulin pump brought a great deal of recognition to Hopkins for an inventive and effective approach to a terribly difficult condition,” Weisfeldt said.

Saudek led by example and relished his role as a mentor to generations of medical fellows. His family said he loved hosting medical students, residents and fellows for high-spirited dinners at his Lutherville home.

In his spare time, Saudek was an avid sailor, a squash player, a clarinetist and a fiercely loyal Baltimore Orioles fan. He is survived by Susan, his wife of 44 years, their four children and nine grandchildren. Family members say they will keep his spirit alive by working to help others and by sailing the waters off Maine that he so loved. In lieu of flowers, the family asks that donations be made to the Johns Hopkins Diabetes Center.

“Dr. Chris Saudek’s life and career exemplified the finest personal qualities and professional achievements one aspires to in academic medicine,” said Paul Ladenson, a professor at the School of Medicine and director of the Division of Endocrinology and Metabolism. “He was an outstanding doctor, an imaginative and productive clinical-investigator and a splendid human being.”

Weisfeldt said the School of Medicine is hoping to set up a fund in Saudek’s honor to continue his work in diabetes.