Some 1,900 significant artifacts are on loan for 15 years 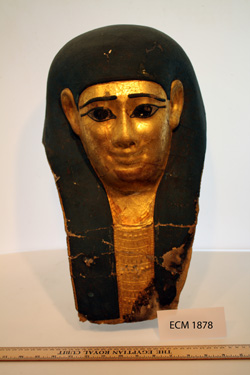 A renowned collection of Egyptian decorative art from Eton College in Windsor, England, has arrived at The Johns Hopkins University for long-term research and display in the university’s Archaeological Museum.

Glazed blue ceramic vessels, ritual amulets and a gilded mummy mask are among the approximately 1,900 pieces of small-scale artifacts on loan for 15 years from the Eton College Myers Collection and other collections of Egyptian antiquities. A number of the objects have been exhibited around the world over the last decade.

During their extended stay in Baltimore, many of the objects will be on display in the Archaeological Museum, beginning in late October, while the rest will become part of the curriculum through a long-term project to create an online catalog in collaboration with the University of Birmingham in England, according to Betsy M. Bryan, the Alexander Badawy Professor of Egyptian Art and Archaeology and director of the Archaeological Museum.

“The arrival of the collection is really exciting,” Bryan said. “Truthfully, it would be difficult to overstate how significant this loan is. Without a doubt, this is a major, world-class collection.”

The collection will give undergraduate and graduate students pursuing degrees in Near Eastern studies and archaeology a chance to conduct hands-on research using the museum’s state-of-the art equipment. Most of the pieces in the collection don’t have an identifiable archaeological context, and the museum’s X-ray fluorescence instrument and Raman spectrometer will allow for noninvasive analysis, “so we’ll actually be able to make some contributions on the materials side,” Bryan said.

The collection is on loan from Eton College, one of England’s best-known independent schools for boys. It was bequeathed to Eton by an alumnus, Maj. William Joseph Myers, who was stationed in Cairo during the last quarter of the 19th century. Egyptian art became “a passion that came to dominate his life,” according to Eton’s website. Myers made a brief return to Eton as an adjutant before returning to his regiment in South Africa, where he died in combat. He willed his prized collection to Eton, which in turn has shared it with the public through display on its campus and by lending it to other institutions. The collection has been exhibited in prominent venues, such as the Metropolitan Museum of Art in New York, and in other cities including Brussels, Madrid, Leiden and a variety of locales in Japan.

“These objects form a unique Egyptian collection among museums around the world because they are primarily small-scale decorative arts rather than things like sculpture,” Bryan said. “Myers had an eye for small vessels that are made of these beautiful ceramic glazed materials. They are just beautiful to the eye in addition to being interesting historically.”

In addition to the vessels, the collection includes two Roman period portraits painted on wooden boards, which Bryan describes as “as realistic as any paintings can be”; a two-foot-tall gilded shrine; and a mysterious group of crocodile palates—no one knows what exactly they were used for, Bryan said, and she and her students are excited about the sleuthing opportunity they present.

The goal of the cataloging project in collaboration with the University of Birmingham is to make the collection available online, reducing the need for the artifacts to travel and therefore preserving the pieces. Work has already begun at the University of Birmingham, where 3D digital scans are being made of many of the 600 artifacts that it will house for the same 15-year period. Another 65 pieces are currently on display at the Barber Institute of Fine Arts in Birmingham through early 2012. When that exhibition closes, those pieces will be sent to Johns Hopkins, Bryan said.

Bryan is teaching a 3-credit course this fall in the Krieger School titled Museum Study of Objects from the Eton College Myers Collection, which is offered by the Department of Near Eastern Studies and cross-listed with the Program in Museums and Society. Twelve graduate and undergraduate students in the class have been working together to write a brochure that will be distributed to visitors in time for the official opening of the Archaeological Museum, the weekend of Dec. 4 and 5.

Eton College and Johns Hopkins objects will begin to go on display this month in the cases facing the adjacent courtyard.