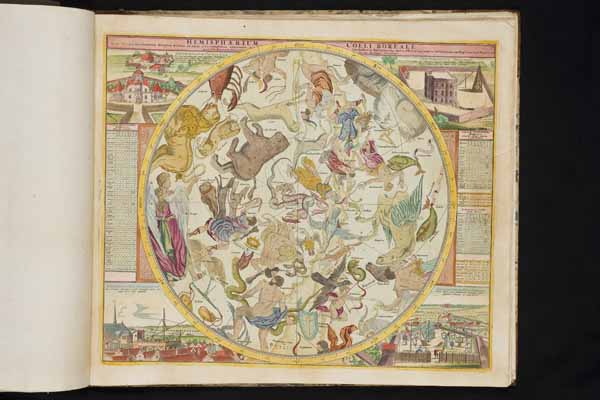 The Johns Hopkins University Sheridan Libraries have acquired a unique collection of 280 rare books and manuscripts relating to the history of scientific discovery from the late 15th to the 20th centuries. A generous bequest from the Hinkes family, the collection was assembled over 20 years by Elliott Hinkes, a member of the School of Medicine’s class of 1967, who is now deceased.

“This is one of the most significant collections ever acquired by the Sheridan Libraries,” said Winston Tabb, Sheridan Dean of University Libraries and Museums. “We are honored to have been chosen by the Hinkes family as the recipient of these magnificent volumes. Dr. Hinkes’ intellectual generosity, as a collector and a man of science, will live on through future generations of Johns Hopkins students and faculty who will have access to these seminal works in their original form.”

The Dr. Elliott and Eileen Hinkes Collection of Books of Scientific Discovery has been well-known in the antiquarian-book trade as one of the most important collections of its kind and constitutes one of the major rare-book bequests in recent memory to a U.S. research university.

The earliest and rarest materials range from a 1495 edition of the works of Aristotle to early editions of many of the most important and influential works of the Scientific Revolution. The collection also contains seminal works from the European Enlightenment, milestones from the Industrial Revolution and a rich collection of the leading scientific publications of 20th-century achievements in science.

• A unique second edition of Coper-

nicus’ treatise on the heliocentric theory of the galaxy, completely unbound and unsewn, as issued from the printer in 1566; no other such copies are recorded.

• A first edition of Galileo’s illustrated treatise on the discovery of sunspots (1613).

• A first edition of Sir Isaac Newton’s monumental treatise on gravitation, the Principia (1687).

• The first printed description of Uranus, the first planet to be discovered since classical antiquity (1781).

• The first appearance in print of Charles Darwin’s theory of evolution, in a rare paper printed by the Linnaean Society (1858).

• Twenty-seven rare offprints and first editions of the works of Albert Einstein, including the first printed formulation of E=mc2.

• Original copies of the three 1953 articles by Watson and Crick outlining the nature of DNA.

In addition to books on scientific discovery, the collection includes such rarities as a leaf from the Gutenberg Bible, the first book printed with the technology of movable type; and a copy of the 1493 Nuremberg Chronicle, an illustrated world history drawn from the Bible.

“Dr. Hinkes, never a serious collector except for some interest in stamps as a boy, was a self-professed autodidact, someone who discovered a passion for antiquarian rarities that gradually led to the accumulation of a truly remarkable collection of some of the greatest milestones in the history of science,” said Earle Havens, curator of early books and manuscripts at the Sheridan Libraries. “He grew to become a true connoisseur as well, keen to find copies in the finest condition, many of them in historically interesting early bindings and endowed with historically important provenance.”

After early admission to the Johns Hopkins School of Medicine as a member of the “Year One” class of 1967, Hinkes received his undergraduate degree from the School of Arts and Sciences in 1964. Upon earning his medical degree, Hinkes began his training at Stanford, where he completed his internship and residency. He then went to UCLA, where he completed a fellowship in oncology and hematology. Hinkes maintained a private practice specializing in medical oncology and hematology in the Los Angeles area for more than 30 years and was an associate clinical professor at UCLA.

Hinkes’ decision to give the books to Johns Hopkins was motivated not only by a sense of pride in his alma mater but by the knowledge that the collection would be used for scholarly work. “The books are where Elliott and I wanted them to be,” said his wife, Eileen. “It warms my heart to learn that our donation of the collection will make such an impact at Johns Hopkins.”

An exhibition of the Dr. Elliott and Eileen Hinkes Collection is planned for October 2011. Images from some of the volumes can be seen at www.flickr.com/photos/brodylc/sets/72157625017596829/show.

The Sheridan Libraries encompass the Milton S. Eisenhower Library and its collections at the Albert D. Hutzler Reading Room in Gilman Hall, the John Work Garrett Library at Evergreen Museum & Library and the George Peabody Library at Mount Vernon Place. Together these collections provide the major research library resources for The Johns Hopkins University. The mission of the Sheridan Libraries is to advance research and teaching by providing information resources, instruction and services. The libraries were rededicated in 1998 to reflect the extraordinary generosity of Mr. and Mrs. R. Champlin Sheridan.