A space switch on land 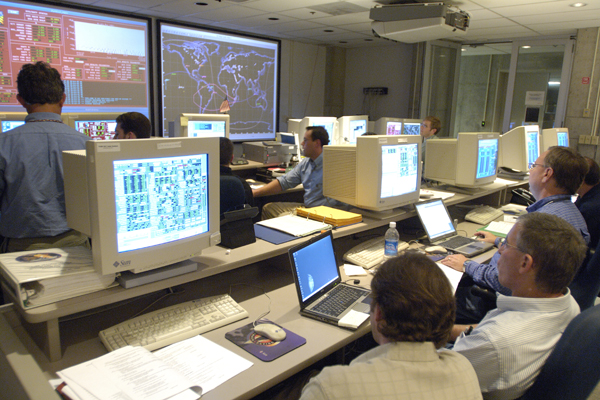 The former mission control center for a NASA astrophysics satellite, seen here in 2007, will be transformed into a center for high-powered computers. Photo: Will Kirk/Homewood Photo

With help from a $1.3 million federal stimulus grant from the National Science Foundation, Johns Hopkins researchers are about to build a powerful energy-efficient computing center in a house-sized room that once served as the mission control center for a NASA astrophysics satellite.

The transformation of room 156 of the Bloomberg Center for Physics and Astronomy will give science, engineering and library researchers at the Homewood campus the space to house about four times as much high-performance computing power, allowing them to launch or expand important projects in areas such as astronomy, turbulence modeling and research data archiving.

“We now have computing projects that are on hold, waiting for space to open up,” said Jonathan Bagger, a vice provost and professor of physics and astronomy, who is principal investigator for the grant. “We have other projects that are operating in very small spaces, waiting for an opportunity to expand. Receiving this grant is allowing us to solve many of these problems.”

The award is among the 475 stimulus-funded research grants and supplements totaling more than $225 million that Johns Hopkins has garnered since Congress passed the American Recovery and Reinvestment Act of 2009, bestowing the NIH and the National Science Foundation with $12.4 billion in extra money to underwrite research grants that were allocated through September.

This computing center stimulus grant can be used only for renovating the room and upgrading its networking systems. However, some computing equipment from other locations will be moved into the new center, and participating researchers are expected to use their own grants to pay for still more modules that will be installed in this space.

“While some of these groups have the funds to buy powerful computers, we still need someplace to put them,” Bagger said. “Without this new center, these researchers would have to keep their equipment in closet-size rooms that are not designed for it and that are less energy-efficient. Having a large, specially designed center for these computers is cheaper and greener. And it will allow researchers to pool their computing power.”

Between 1999 and 2007, the 3,100-square-foot room served as the control center for NASA’s Far Ultraviolet Spectroscopy Explorer mission. FUSE’s purpose was to explore the universe using the technique of high-resolution spectroscopy in the far-ultraviolet spectral region. The original three-year mission was extended several times, but in 2007 the spacecraft was decommissioned, and the former control center has remained mostly vacant.

“We were very lucky that the large room used for directing the FUSE mission was available,” Bagger said. “The timing was perfect.”

Marty Kajic, facilities project manager for the Krieger School of Arts and Sciences, said that the space will be reconstructed to accommodate the power supply, cooling system and backup protection required for high-performance computing modules. “It will have a full monitoring system that collects data on how well the equipment is operating, so that we can make the room even more energy-efficient,” he said.

The renovated room will also feature significantly upgraded connections to Internet 2, which can be used to share data with other U.S. research universities and national labs. Construction is expected to begin in the coming weeks, with completion due within about six months.

Until the renovation is completed, many researchers will continue to use the Homewood High-Performance Cluster, a data center run by a group of the campus’s scientists, engineers and library researchers who share limited resources in a smaller room on the fourth floor of the Bloomberg building. “There’s not enough cooling capacity to expand,” said Mark O. Robbins, a physics and astronomy professor, who chairs the cooperative’s steering committee.

Moving the existing cluster equipment to the former FUSE room and adding modules that researchers have been waiting to purchase will allow the university to take a major step forward, Robbins said. “The need for having more and more power for computing is one of the challenges that we face,” he said. “It’s what you need to be a major player in computational science and engineering research. This will be a state-of-the-art facility.”

Also looking forward to the facility’s completion is Sayeed Choudhury, associate dean of university libraries and Hodson Director of the Digital Research and Curation Center, who received an NSF grant whose primary goal is “to preserve research data being generated by science and engineering projects throughout the country.”

Without the expanded computing capacity that the new center will allow, this archiving project would be difficult, Choudhury said. “Our current policy calls for having two copies of each data collection. That would take up half of our library’s current archiving storage space. We really need this new infrastructure to expand our project,” he said.

For Charles Meneveau, the Louis M. Sardella Professor of Mechanical Engineering in the Whiting School, the new high-performance computing center will allow him to complete a long-awaited project: a simulation of a turbulent channel flow. Such a simulation will allow researchers to study precisely what happens when a fast-moving gas or liquid rushes past a solid boundary, such as over an aircraft or wind turbine wing. The friction causes turbulence to form adjacent to this boundary.

“Our goal,” Meneveau said, “is to be able to describe this phenomenon mathematically in four dimensions—in three spatial dimensions and over time. But this requires a vast amount of computing power and storage space. Right now, we don’t have enough computer power to perform, and space to store, the entire turbulent flow simulation.”

The new computing center should resolve that problem, Meneveau said, allowing him and his colleagues to operate a large storehouse of turbulence data. Via the Web, researchers around the world will be able to access select portions for their own research projects. “You could think of it like a bank,” Meneveau said. “The bank maintains a database with a huge amount of information about all of its accounts and transactions, but you might just want to look at one small part of this, such as your own checking account. In the same way, this project will allow scientists all over the world to look at what’s happening to a single particle flowing within a turbulent channel flow.”

The facility will eventually also house Data-Scope, a new scientific instrument capable of “observing” immense volumes of data from various scientific domains such as astronomy, fluid mechanics and bioinformatics. The project, led by Alexander Szalay, a professor of physics and astronomy, will include the integrated software and hardware needed to analyze massive data sets. A Data-Scope project summary states that the instrument is “designed to enable data analysis tasks that are simply not possible today.”

The $1.3 million grant for transformation of the former FUSE control room became effective Sept. 1 and will be allocated over a three-year period. Szalay, Meneveau, Choudhury and Robbins are serving as co-investigators for the award.