Getting the green message out 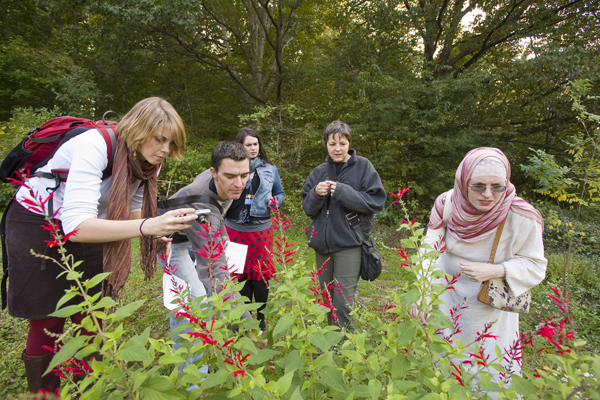 Students, staff and faculty lined up in front of Homewood’s Levering Hall last Wednesday to play a game of guess the water: bottled or filtered tap. Many guessed wrong or had trouble discerning the differences, an uncertainty that only bolstered the Students for Environmental Action group’s point that bottled water—no matter how stylish the package design—doesn’t necessarily triumph in a taste battle with its tap form.

Why does it matter? For starters, eight out of 10 plastic water bottles end up in a landfill. To illustrate that point, a group from ECO-Rep stood at a table on Keyser Quadrangle flanked by hulking bags of empty water bottles that had been discarded and not recycled.

These lessons on water use came on day three of Green Your Routine Week, a full slate of events to celebrate environmentally sustainable living and thinking at Johns Hopkins. The week, an annual event started in 2007, also casts a spotlight on the number of student-led efforts currently under way to greatly improve Johns Hopkins’ environmental profile. 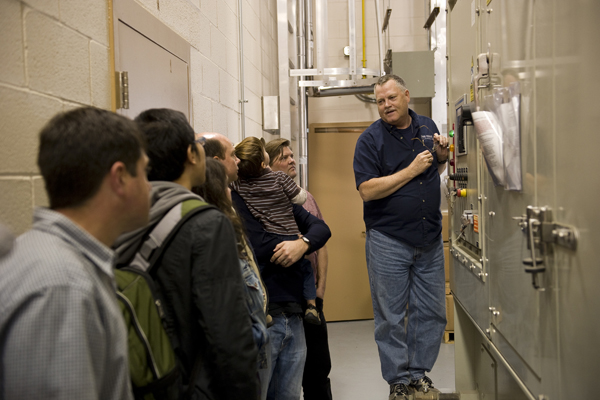 This year, Green Your Routine Week was hosted on both the Homewood and East Baltimore campuses, a joint effort of the Office of Sustainability, the School of Public Health’s Environmental Stewardship Committee, Johns Hopkins IT Recycling and environmental student groups from both campuses. At Homewood, the SEA, ECO-Reps, Real Food Hopkins and the Sustainable Hopkins Infrastructure, or SHIP, took the lead. In East Baltimore, the Leadership Initiative for the Environment sponsored events at the School of Medicine, and the Environmental Health Sciences Student Organization organized for the School of Public Health.

For the tour, Marta Hanson, an expert at the School of Medicine on ancient medicine, guided participants around the campus to discover edible and useful grasses, fruits and more that grow in unsuspecting places. Highlights were the Cornelian cherry orchard (the fruit makes great sour cherry soup or jam, she said), the quince tree (worth the effort it takes to turn it into tea) and an American persimmon tree (for cookies, as a jam to go with sharp cheeses and in a baked pudding). She also pointed out wild chives, dandelions, pokeweed, chicory, burdock, prickly lettuce, camomile, pine and cedar needles, mint, mulberry and serviceberry trees, acorns, beechnuts and sugar maple trees.

“The main point,” Hanson said, “is that I would like to see an even more edible landscape on campus and around the city. And that I would like more people to pay attention, harvest, process, etc., the range of edible foods in our urban environment—harvesting, of course, only what one can consume and leaving, of course, plenty for other critters and foragers. It’s fun and makes life, eating and cooking more interesting,” she said.

The East Baltimore events included a bike-commuter workshop and a group bike ride through Patterson Park, a composting focus group at the School of Public Health, a Sustainable and Healthy Harvest Table at the Farmers Market at Johns Hopkins and an EmPOWER Maryland You Owe It to Yourself interactive exhibit at the School of Medicine’s Broadway Research Building that allowed users to calculate the environmental and financial savings associated with various energy-efficient behaviors.

Davis Bookhart, chair of the Johns Hopkins Sustainability Committee and director of the Office of Sustainability, said that his team has made a concerted effort this past year to create a more universitywide sustainability network, and to reach out beyond Homewood.

“I don’t think we can do a universitywide green week yet, but we can at least do the two largest campuses,” he said. “But the plan is to expand each year.”

Bookhart said he views Green Your Routine Week as part of the multifaceted Implementation Plan for Advancing Sustainability and Climate Stewardship that was adopted by university President Ronald J. Daniels earlier this year. The plan encompasses research, education, community outreach, and green practices and infrastructure. A key component is the goal of cutting emissions of climate-changing carbon dioxide gas by more than half from projected levels by 2025.

The university is investing more than $73 million in conservation and efficiency measures that will cut emissions caused by facilities operations by an initial 81,000 metric tons a year. The remainder of the goal will be achieved by adopting new technologies that emerge between now and 2025 and by motivating members of the university community to reduce energy consumption and environmental impact.

Bookhart said that events like those hosted this past week can serve as reminders that sustainability needs buy-in from everyone.

“The message here is that my office can’t make this a green school by itself. We need everyone’s contribution to make this a more sustainable university,” he said. “No matter what their role or function, people are making decisions throughout the day that will impact whether or not we will become a more or less green institution. Whether you turn off the lights when you leave the office or shut down your computer, these are things I can’t do. But if we have tens of thousands of employees all doing things that help us reduce greenhouse gas emissions, we can achieve what we set out to do.”

To promote this philosophy, the Office of Sustainability will roll out an Every Job Is a Green Job campaign next month.

In the past year, the university decreased energy use by 2 percent despite adding buildings, and its recycling rate increased by 24 percent. Since 2006, water use has decreased by roughly 21 percent each year.

A sore spot for Bookhart has been the university’s paper use, which has increased each of the past three years.

“We want to bring down these numbers,” he said, “and this is a great example of how lots of little decisions at the individual level add up to big impacts. If those decisions are adjusted even slightly, we can transform this place.”

One good example of how small changes make a difference, he said, is that “the amount of recycled paper we purchase has increased. Frankly, I would like 100 percent of our paper to be recycled.”

Bookhart said he bets that most people can’t tell the difference between 35 percent-recycled paper and plain paper.

Perhaps that will be a guessing booth in next year’s green week?