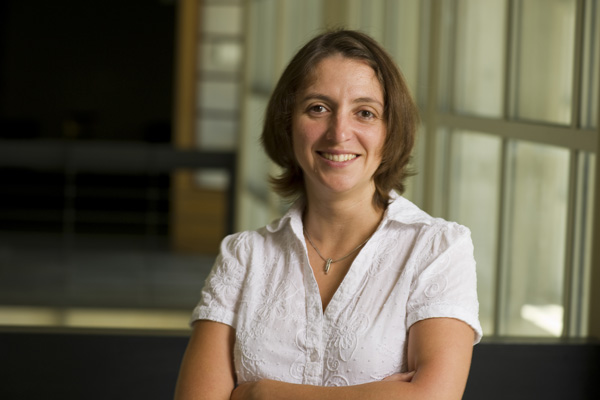 Natalia Drichko is a recipient of an American Physical Society grant for early career female physicists whose work has been interrupted for personal reasons. Photo: Will Kirk/Homewoodphoto.jhu.edu

As a young Russian physicist doing her training in Stuttgart, Germany, Natalia Drichko envisioned a career that included research on unusual superconductivity and eventually becoming a university professor there. Her plans did not include meeting an American scientist, getting married and moving to the United States. But that is exactly what happened.

Now an associate research scientist at Johns Hopkins’ Institute for Quantum Matter in the Krieger School’s Henry A. Rowland Department of Physics and Astronomy, Drichko has not only a husband (also a Johns Hopkins University faculty member) but also an 18-month-old daughter. Like many working mothers, Drichko struggles to balance her research and career, her parenting responsibilities and her marriage.

“I am the same as every working mother who has to do a lot of juggling. We’ve all had to compromise our careers for our family and our family for our careers,” said Drichko, who came to the United States—and Johns Hopkins—in fall 2008, leaving behind family, friends and several research projects.

That balancing act is why Drichko, 38, was so happy to learn she was selected as a recipient of the American Physical Society’s 2010 M. Hildred Blewett Scholarship. A career re-entry grant of up to $45,000, the scholarship—given each year to between one and three deserving physicists—supports early career female physicists whose professional life has been interrupted for family or other personal reasons. (Drichko’s move, marriage and new parenthood, for instance, prevented her from conducting research from the time she left Europe until she received the scholarship.)

The scholarship was established by the 2004 bequest of Canadian accelerator physicist M. Hildred Blewett, who worked at Brookhaven and Argonne national laboratories as well as at Switzerland’s CERN, now home to the Large Hadron Collider. The one-year grant can be used to underwrite expenses ranging from tuition and fees to travel, equipment and even child care.

Drichko is the second Johns Hopkins researcher to benefit from this grant: Fellow Physics Department member Janice Wynn Guikema (also married to a Johns Hopkins faculty member) was a recipient in both 2008 and 2009.

Though the scholarship money certainly won’t pay all of Drichko’s expenses, it is nonetheless an enormous help in allowing her to resume her work and begin the process of applying for grants.

Daniel Reich, chair of the Department of Physics and Astronomy, said, “This is an excellent program that the American Physical Society is running. It provides a great way for the field of physics to retain highly talented women scientists, such as Natalia Drichko and Janice Wynn Guikema, whose personal situations have not allowed them to stay on a standard scientific career path. We at Johns Hopkins are very pleased that Dr. Drichko and Dr. Wynn Guikema have been able to take advantage of this opportunity, and we look forward to their continued success.”

Drichko said that the scholarship money is allowing her some breathing room.

“It provides me an amazing opportunity to do the research I would like to do at a place where I happen to be for a completely private reason. I do not need to compromise between my family and the work that is so important for me. I can just have it all,” she said.