Gilman, past and present

University community comes together to celebrate rededication of historic building 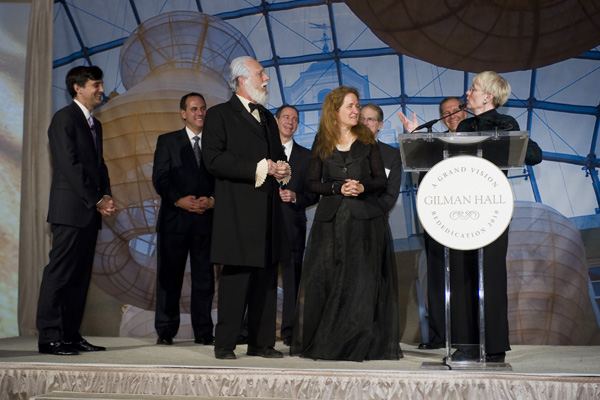 More than 400 people turned out Saturday evening, Oct. 23, to celebrate the rededication of the newly renovated Gilman Hall, a $73 million restoration project that blends original features such as the building’s distinctive stained glass windows with more modern additions such as an auditorium and screening room. The event, attended by trustees, university administrators, faculty members and others, showcased Gilman’s old and new spaces, including a gleaming new archaeological museum set to open in December.

The early part of the evening featured humanities-themed cocktail parties and interactive sessions in which guests were invited to sample, for example, Chinese and Italian cuisine while discussing Latin America’s art, history, literature and culture.

Guests were then treated to dinner in an elegantly dressed tent, where they heard from university President Ronald J. Daniels and Katherine S. Newman, the James B. Knapp Dean of the Krieger School of Arts and Sciences. Alumnus Eric Sundquist, the Andrew W. Mellon Professor in the Humanities, delivered the keynote address.

Gilman, the Homewood campus’s flagship building, had been closed for more than two years while the renovation was under way. In addition to the auditorium and museum, the restored building has state-of-the-art classrooms, offices and meeting rooms, all of which were designed to preserve the architectural integrity and history of the 1915 building.