Where does Johns Hopkins go from here? 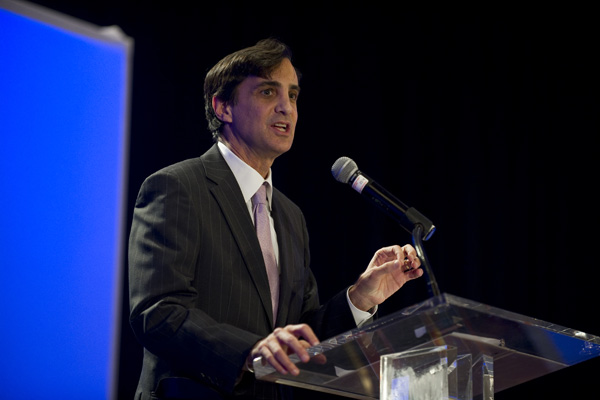 President Ronald J. Daniels welcomes administrative and volunteer leadership to the daylong summit designed to chart the future course of the university. Photo: Will Kirk/Homewoodphoto.jhu.edu

A who’s who of administrative and volunteer leadership from across the Johns Hopkins enterprise recently took part in a landmark daylong event to help chart the future course for the university.

The Johns Hopkins Volunteer Summit, held Oct. 22 at the Renaissance Harborplace Hotel, convened more than 350 Johns Hopkins leaders—including deans and directors, trustees, members of the alumni council, advisory board members and other volunteers from all university divisions—to think creatively, strategically and collectively about some of the biggest challenges the university faces.

The summit, which also included students and recent alumni, marked the first such gathering of JHU volunteers and leaders. It was organized by a university leadership group that included the offices of the President and the Provost, and key executives from the medical institutions and the Alumni Association.

In his welcoming remarks, President Ronald J. Daniels called upon those in attendance to offer up their wisdom and experience to propel Johns Hopkins forward and re-energize the university’s mission—and modify it where necessary.

“We have the obligation to interpret and reinterpret our mission in light of an array of challenges that will test our tenacity, imagination, our courage and daring, our excellence and our humanity. To do otherwise is to risk complacency, something that is mercifully in short supply at Johns Hopkins,” Daniels said. “Ours is a culture of innovation and entrepreneurship. We need you to succeed as part of this transformation that will unfold. This is a day to pause to take stock of where we are, survey the landscape around us and consider the implications for our great institution.”

The event was not intended to produce a concrete plan but rather to look for areas where the university should focus or redouble its existing efforts.

To set the scene, Daniels cited five major challenges that elite universities face in the 21st century: intensified competition, both domestically and globally; the rapid evolution of technology; the rising cost of education; the value of integrated research and teaching; and the mounting expectations and issues that weigh on urban-based institutions such as Johns Hopkins.

In terms of competition, Daniels cited the pressure coming from other elite domestic universities, many of which emulate traditional Johns Hopkins strengths, and from overseas institutions that are competing for students, faculty and resources. He mentioned the profusion of new universities in China, South Korea, Singapore and the Middle East that are on a fast track to success. The King Abdullah University of Science and Technology, he said, opened in 2009 with a $10 billion endowment, a figure that tops all but five U.S. universities.

“Many nations, particularly those in the developing world, have now recognized that the path to greatness lies in nurturing institutions of excellence in higher education,” he said.

Johns Hopkins and other urban-based universities also face issues of crime, poverty, unemployment and poor health around their campuses.

“These are issues we cannot watch from afar,” he said. “Our students and faculty cannot thrive if they are worried about their safety, or that the local schools are not adequate for their children, or if they don’t feel the environment around them can foster creativity and innovation. We want what is best for the city, which in turn is best for us.”

Following an introduction of the format by Provost Lloyd Minor, those gathered were broken into discussion groups focusing on one of four major topics: “At Home in the City: Forging a New Partnership With Baltimore,” “The Global Johns Hopkins,” “The Promise and Privacy Challenges of Personalized Medicine” and “Teaching and Learning in the Digital Age.”

The forums were led by deans, directors and other senior Johns Hopkins leadership.

Each forum’s participants were divided into tables of six to 10 individuals, including a group moderator who presented three or four broad questions and facilitated discussions.

In the “At Home in the City” session, for example, the tables were asked to discuss the compelling reasons for Johns Hopkins to devote resources to addressing the profound problems facing Baltimore.

The forums were lively and spirited, with each participant given a chance to weigh in with thoughts.

Following the plenary sessions, the participants reconvened in a main hall to take stock of the day’s discourse.

The findings were many.

In Baltimore, Johns Hopkins needs to help generate employment, enhance safety around its campuses, increasingly engage with other institutions and local government, yet always be mindful of the community’s needs and desires.

Katherine Newman, the James B. Knapp Dean of the Krieger School of Arts and Sciences and one of the leaders of the Baltimore City forum, said that her group agreed that the next 10 years were critical to create an atmosphere of turnaround in the city.

“We need to try to draw people—people with means and those willing to put shoulder to wheel—into our community and inside Baltimore, or risk losing them to the surrounding counties,” Newman said.

On the subject of technology, participants felt that Johns Hopkins needs to embrace new technologies in the classroom but be mindful of privacy concerns and not jeopardize the university’s core values.

In the global realm, the university needs to expand the existing Johns Hopkins brand and optimize its global presence, not simply through expansion but in partnerships with other institutions of similar caliber, and by linking with alumni throughout the world to increase opportunities for current JHU students.

“We heard often in our session [on global issues] that we need to harness the power and expertise of JHU alumni,” said Martha Hill, dean of the School of Nursing and one of the forum’s leaders.

Bill Nelson, a forum leader for the discussion on personalized medicine, said that his group addressed concerns of privacy, ethics and costs associated with the explosion of genomics-based medicine.

Nelson, the Marion I. Knott Director of the Sidney Kimmel Comprehensive Cancer Center and Professor in Oncology, said the consensus was that people want more information on their health and to be more involved with their care. However, his group agreed that Johns Hopkins needs to play some role in making sure personalized medicine can be made accessible to everyone, and in laying down a framework of ownership over this information and its ethical use.

“Many talked about the concern of creating a two-class society, those who could afford personalized medicine and those who could not, and that it should be distributed globally,” Nelson said.

The summit also included a presentation by Edward D. Miller, the Frances Watt Baker, M.D., and Lenox D. Baker Jr., M.D., Dean of the Medical Faculty and CEO of Johns Hopkins Medicine, on health care reform and the effect it will have on The Johns Hopkins Hospital.

Among those attending the event was Ken Hirshman, a graduate of the Whiting School of Engineering and a Baltimore City forum participant, who called the event “exciting and informative.”

“The leadership realizes that you have to be on guard to today’s issues and challenges to make the university successful and for it to continue to grow,” said Hirshman, CEO of Leedo Cabinetry. “Now we have to capitalize on these ideas and get a game plan together. The genius is in the implementation.”

Hirshman said he especially appreciated the focus on Johns Hopkins’ role in Baltimore.

“It’s good to think that the university recognizes how the environment that it lives in is very important to its success,” Hirshman said. “It’s not about just building new homes in one area; it’s everything about how we interact with the city.”

Ray Snow, president of the Johns Hopkins Alumni Association and a participant in the technology forum, described the event as “inspiring and energizing,” as did many fellow alumni.

“Universally, the alumni relished the opportunity to meet President Daniels and other Johns Hopkins volunteers from across the country,” said Snow, an ex-officio member of the university’s board of trustees and a wealth management adviser with Merrill Lynch. “They were particularly thrilled to meet with and hear from the students in attendance.”

In his closing remarks, Daniels thanked everyone for their generous time and input and said that the issues and items discussed would provide a framework for discussion in future leadership meetings on the university, division and department levels.

“This is our launching point,” he said.