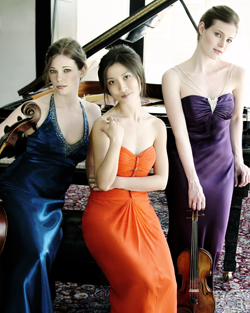 Johns Hopkins University’s Evergreen Museum & Library will open its 2010–2011 Music at Evergreen concert series on Saturday, Nov. 20, with a performance by the renowned Claremont Trio at 3 p.m. in the intimate setting of the museum’s Bakst Theatre.

Featured on the program will be Frank Martin’s Piano Trio on Irish Folk Tunes, Shostakovich’s Piano Trio No. 2 in E minor, Op. 67, Paul Schoenfield’s Cafe Music and Ravel’s Piano Trio in A minor.

Following the concert, a tea reception will be held in the museum’s Far East Room, where audience members will have the opportunity to meet with the musicians.

The Claremonts are the first winner of the Kalichstein-Laredo-Robinson International Trio Award and the only piano trio ever to win the Young Concert Artists International Auditions. Twin sisters Emily Bruskin (violin) and Julia Bruskin (cello) formed the trio with Donna Kwong (piano) in 1999 at the Juilliard School. The Claremonts are based in New York City near their namesake, Claremont Avenue.

The Palm Beach Daily News has praised the ensemble for its “aesthetic maturity, interpretive depth and exuberance,” and The New York Times said, “They play with an uncommon ferocity.”

Also performing in this year’s Music at Evergreen concert series will be the Edmar Castaneda Quartet, on March 12, and violinist Hahn-Bin, April 16. Both concerts are at 3 p.m.

Three-concert series subscriptions are $55, $40 members and $25 students with valid ID; individual concert tickets are $20, $15 members and $10 students with valid ID. Tickets include admission to the museum, which is open by guided tour only (offered hourly on the hour from noon to 3 p.m.) and the post-concert reception. Seating is extremely limited; advance tickets are available by going to www.museums.jhu.edu, calling 410-516-0341 or visiting the Evergreen Museum Shop.

The 2010–2011 Music at Evergreen concert series is made possible by the Evergreen House Foundation.