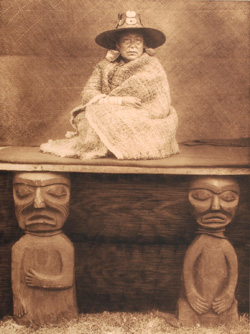 Opening this week at Johns Hopkins University’s Evergreen Museum & Library is the exhibition “Edward S. Curtis: Photogravures from The North American Indian,” which will run through March 27.

The museum will host an opening reception from 6 to 8 p.m. on Wednesday, Nov. 17, with curatorial remarks at 7 p.m. The opening is free, but reservations are requested at 410-516-0341 or evergreenmuseum@jhu.edu.

In 20 volumes issued from 1907 to 1930, American photographer Edward S. Curtis (1868–1952) created artistic photographs and detailed anthropological records of all tribes west of the Mississippi River. The project, backed by banking magnate J.P. Morgan, was lauded by President Theodore Roosevelt, who insisted that Curtis’ photography was “one of the most valuable works which any American could now do” and that it was “a good thing for the whole American people.”

Printed on the finest paper and bound in leather, the lavishly illustrated sets were sold by subscription at prices prohibitive for all but the most avid collectors and libraries. Each set contained more than 2,000 photogravures, made by a photoengraving process during which the photographic image is chemically etched onto a copper plate. The plate is then inked and the images printed by hand, one at a time.

“Edward S. Curtis: Photogravures from The North American Indian” provides a broad survey of Curtis’ monumental project and traces his career over the three decades of its production. The exhibition invites the viewer to consider both the aesthetic impact and historical significance of the project, while bearing in mind that the photographs are not concerned with documenting the Native Americans’ own experience or perspective; rather, they reveal Curtis’ artistic ambitions, political engagements and awareness of art-historical movements.

The exhibition of more than two dozen photogravures is drawn from the rare, complete set owned by Johns Hopkins, donated to the university in the early 1980s by Katharine Garrett Bainbridge. Bainbridge’s mother, Katharine Johnson Garrett, purchased the subscription in 1908 as a gift for her husband, Robert Garrett, whose family home was Evergreen. Today the set is part of the Sheridan Libraries’ rare books and manuscripts collection and appropriately is housed at Evergreen’s John Work Garrett Library.

“Edward S. Curtis” originally was organized for Gettysburg College’s Schmucker Art Gallery by gallery director Shannon Egan based on her 2006 Johns Hopkins doctoral thesis. It has been adapted and expanded for its Baltimore presentation by Evergreen director and curator James Archer Abbott, and includes Native American “souvenirs” that were collected by Robert Garrett and his brothers, John and Horatio, during their transcontinental railroad trip in 1887.

Student participation in the exhibition arose from the undergraduate course Native American Art taught in the Krieger School of Arts and Sciences’ Department of the History of Art by Lisa DeLeonardis, the Austen-Stokes Term Professor in the Art of the Ancient Americas. Analyzing Curtis’ work with an eye for highlighting the diversity of Native American beliefs about land, DeLeonardis’ students wrote descriptive texts to accompany the images on display.

Admission to the exhibition is free with the guided museum tour, or $3 for the exhibition only. A 50-page illustrated catalog published by the Schmucker Art Gallery is available for sale in the Evergreen gift shop.

The exhibition is made possible by the Evergreen House Foundation and the Maryland State Arts Council.

For more information, including museum hours and ticket prices, call 410-516-0341 or go to www.museums.jhu.edu.