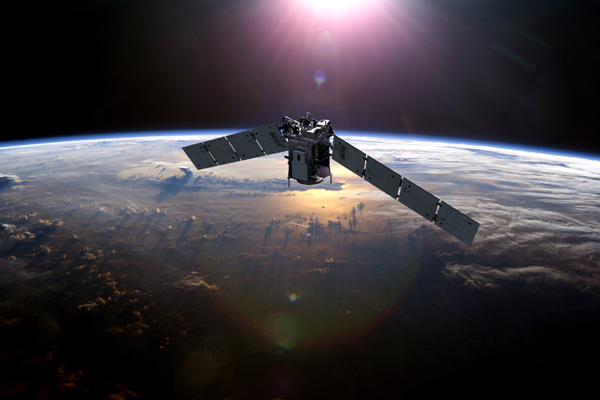 Nine years after beginning its unprecedented look at the gateway between Earth and space and collecting more data on the upper atmosphere than any other satellite, NASA’s Timed (Thermosphere, Ionosphere, Mesosphere Energetics and Dynamics) mission has been extended yet again to continue to study the influences of the sun and humans on our upper atmosphere. Until Timed, built and operated by the Johns Hopkins University Applied Physics Laboratory, the mesosphere and lower thermosphere/ionosphere—the region that helps protect Earth from harmful solar radiation—had been one of the least explored and understood regions.

Timed began an extended mission on Oct. 1—its fourth extension since the original two-year mission began in January 2002—and will continue collecting and analyzing data through 2014. Timed will focus this time on a problem that has long puzzled scientists: differentiating between human-induced and naturally occurring changes in this atmospheric region. Scientists have been conducting studies during what has been the least active part of the sun’s 11-year solar cycle; by the end of this mission phase, when the sun is expected to be at peak activity, Timed will have collected data during a full solar cycle.

During the extended mission, scientists will pay particular attention to temperature changes in the upper atmosphere. “The greenhouse gas loadings in the upper atmosphere have been increasing during the past few decades,” said APL’s Sam Yee, Timed project scientist. “The solar energy inputs and their effect on our atmosphere, however, are changing following the rising and declining activities of the solar cycles. Systematic observations taken longer than a full solar cycle would allow us to delineate potential human-induced changes from the naturally occurring solar-driven changes.”

Timed scientists will compare their data against existing atmospheric models, as well as against data collected before Timed was launched in 2001, to better analyze phenomena occurring in the mesosphere and lower thermosphere/ionosphere region. They believe that cooling temperatures in this region, resulting from increasing greenhouse gases, are causing the thermosphere to shrink (or become less dense) and its composition to change. One result of fewer particles in the thermosphere is less drag on satellites in space, and that condition affects how long spacecraft and/or space debris stay in orbit. Composition changes in the thermosphere would also alter ionospheric structures that affect radio wave propagation and communications.

Timed is collaborating with other sun-Earth missions to investigate the energy chains responsible for disturbances in our upper atmosphere. The APL-built Advanced Composition Explorer spacecraft has continually provided interplanetary magnetic field data and solar wind speed and density measurements for Timed investigations. Timed is also collaborating with the recently launched Solar Dynamics Observatory, managed by NASA Goddard Space Flight Center, which is providing Timed scientists with continuing solar radiation measurements and new views of how solar activity is created.

“We’re looking forward to the twin Radiation Belt Storm Probes spacecraft, being built by APL for launch in 2012, to give us our first detailed look at how solar activity affects Earth’s radiation belts,” Talaat said.