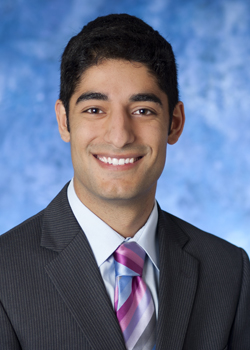 Krieger School senior Mohammad Modarres will be studying in Ireland next year, having earned one of the top honors in academia: a George J. Mitchell Scholarship.

One of 12 scholars selected from a nationwide pool of applicants, Modarres, a Bloomberg Scholar majoring in public health studies, will pursue a master’s degree in development practice, a new program funded by the American-based MacArthur Foundation and offered jointly by University College Dublin and Trinity College Dublin in partnership with the National University of Rwanda.

Mitchell Scholars earn a year of graduate study at universities in Ireland and Northern Ireland. Scholars are selected based on their academic achievement, service and leadership. The program provides tuition, housing and stipends for living expenses and international travel. Administered by the U.S.-Ireland Alliance, a nonprofit organization in Washington, D.C., the scholarship is named in honor of the U.S. senator who played a pivotal leadership role in the Northern Ireland peace process. Because he is pursuing a two-year program, Modarres will be seeking outside funding for the second year of his studies.

Modarres, 22, said he will use his Mitchell Scholarship to deepen his academic understanding of sports and their role in social and economic development, and that he looks forward to continuing postgraduate study that emphasizes the interconnectedness between politics, governance, civil society, public health, environmental conflict and climate change.

“I am most excited,” he said, “about the program’s emphasis on interconnectedness between fields and its ‘development cannot be taught from a book’ attitude that integrates field work in Uganda, Rwanda, Congo and Liberia within the curriculum. I think it’s a perfect fit for me after exploring a holistic study with the Public Health Studies program at Johns Hopkins.”

His mission, as described by John Bader, associate dean for academic programs and advising in the Krieger School, is to use sports and the arts as tools for social development to help young people around the world contribute to development in their countries.

Modarres said he began to see the connection between sports and public health education when he worked with a nonprofit sports center for disabled youth in Iran, and later when he was involved with a youth surfing club in Gaza. In summer 2008, he biked across the United States with 4K for Cancer, an organization founded at Johns Hopkins to raise money for and awareness of cancer.

As a recipient of a Provost’s Undergraduate Research Award, in summer 2009 Modarres analyzed the work of social entrepreneurs from around the world at Ashoka Global and traveled to South Africa to work with MonkeyBiz South Africa, a Cape Town–based fair trade organization that uses handicrafts to help finance public health initiatives in the township. Modarres applied his experience in managing a fair-trade organization to his own fair-trade projects that fund other social ventures. He currently sits on the organization’s U.S. board of directors.

While working with MonkeyBiz, Modarres met the leaders of FIFA’s Football for Hope initiative, a $10 million campaign providing youth communities access to health and educational services through soccer. Modarres returned to South Africa to become the initiative’s first program assistant and helped with portfolio and capacity development projects that combined sports and the arts to address “taboo” health topics, with a particular focus on HIV/AIDS. He took a leave from his studies at Johns Hopkins to spend January through August 2010 in Cape Town, where each day more than 100 people visited the Football for Hope Centre for classes and activities.

Modarres said that his experiences with Ashoka and Football for Hope have taught him that rather than being idle pastimes, sports “have the potential to be one the most effective means to giving disadvantaged communities access to the education they need to prosper.”

In his essay for the Mitchell Scholarship, Modarres wrote, “We were able to create bonds that enabled us to break through cultural taboos concerning sexuality, personal hygiene and other issues pertinent to tackling the health challenges of poor communities. The arts and sport proved repeatedly, then, to be a very promising means of advancing development at the grassroots level. They instilled broader habits and abilities into disadvantaged populations, such as leadership, discipline, personal responsibility and empathy.”

In addition to his sports-related development work, Modarres has, as one of the university’s Woodrow Wilson Undergraduate Research Fellows, studied how to restructure the United States’ sanctions policies to give international citizen sector organizations greater ability to provide public health resources to the Iranian people and ultimately create diplomatic dialogue between the U.S. and Iran. He further researched specific political structures in the Middle East as a scholar assistant to two scholars at the Woodrow Wilson International Center for Scholars.

His experiences, he said, have allowed him to combine his interests in public health, community empowerment and social entrepreneurship to work toward becoming a public health practitioner focusing on facilitating access for youth communities to public health and educational services through their interest in sport and the arts. He said he hopes that after providing such services across the Middle East, he can help be part of creating a more structured social profit sector in the region.

Modarres is also a published political cartoonist with works in the New York Times book A Nation Challenged, Newsweek online, and The Star-Ledger and other newspapers. He has won more than a dozen national and international art contests, and his artwork has been accepted to the collection of the 9/11 Museum at Ground Zero.

Modarres, who is from Portland, Ore., is the university’s fourth Mitchell Scholar since 1998, when the program began.

Since April 2001, all candidates for major academic scholarships, including the Mitchell, Rhodes, Truman and Marshall, have been coached by Bader, who is leaving his post at the end of December. Bader’s students have won nearly 100 Fulbright and DAAD scholarships, along with so many Truman scholarships that the university was designated an Honor Institution by the Truman Foundation. The eight Marshall winners under his nine years of advising represent half the Marshalls won by Johns Hopkins in nearly 60 years of the program’s history.

“I am so pleased to end my decade of service to Hopkins with Mohammad’s win,” Bader said. “He is an amazing young man: talented, dedicated, humane. My assistant, Vicki Fitzgerald, who has been a key contributor to our wins, and I saw such a change in him after his time in South Africa. I know that he, like all the winners before him, will continue to use his ‘knowledge for the world,’ ” he said, referencing the slogan of the university’s most recent capital campaign. “We can all be proud of them.”

Filed under Recognition, Scholarships and Fellowships