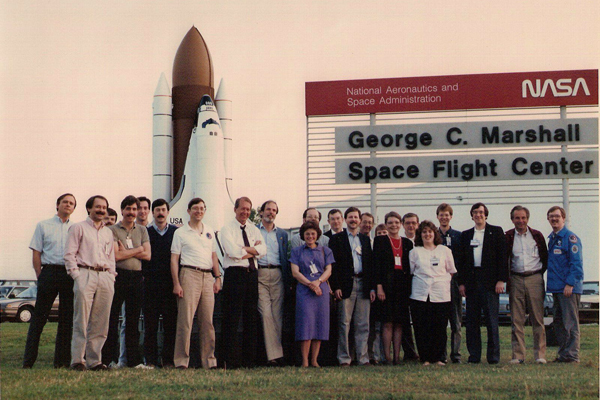 The JHU HUT team poses for a team photo outside the Payload Operations Control Center building at NASA’s Marshall Space Flight Center in May 1990. Among them are professors Arthur Davidsen (in front of shuttle model, with tie), principal investigator; Paul Feldman (to Davidson’s right); Warren Moos (second from right); and William Blair (far right).

Twenty years ago this week, the Hopkins Ultraviolet Telescope was launched into space aboard NASA’s space shuttle Columbia from the Kennedy Space Center in Cape Canaveral, Fla., as part of the 12-day Astro-1 astronomy mission.

The telescope was conceived, designed and built by Johns Hopkins University astronomers and engineers to perform astronomical observations in the far-ultraviolet portion of the electromagnetic spectrum, which are wavelengths of light that can’t be seen by ground-based telescopes. 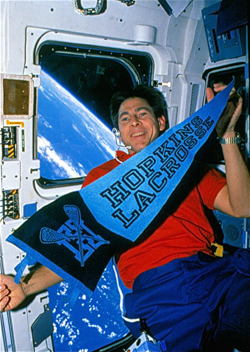 Johns Hopkins research scientist Samuel T. Durrance, a payload specialist, floats by the windows on the aft flight deck of the space shuttle Columbia with a Hopkins Lacrosse banner.

Nearly 30 scientists and engineers from the Krieger School of Arts and Sciences, Whiting School of Engineering and Applied Physics Laboratory, led by principal investigator Arthur F. Davidsen (who died in 2001), staffed a control room at NASA’s Marshall Space Flight Center in Huntsville, Ala., around the clock during the mission.

Aboard the spacecraft was payload specialist Samuel Durrance, who was at the time a research scientist in the Department of Physics and Astronomy at Johns Hopkins and a member of the HUT team (and is now a professor at Florida Institute of Technology).

In the end, the research facilitated by HUT’s first mission—it would fly again in March 1995—resulted in more than 80 scientific papers being published. “The HUT project was groundbreaking and paved the way for many other astrophysics projects to come at Johns Hopkins,” says William Blair, a research professor at Johns Hopkins and a member of the two HUT teams.

For more on HUT and its findings, go to hut.pha.jhu.edu/hut.html.