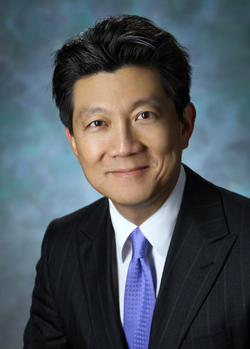 W.P. Andrew Lee, a Pennsylvania hand surgeon heralded for his successful hand transplants and breakthrough research on overcoming rejection in composite tissue grafting, has been named chair of the newly formed Department of Plastic and Reconstructive Surgery at the Johns Hopkins University School of Medicine.

Creation of the new department will facilitate its access to additional funding for research and innovation, and an improved platform for the training and recruitment of surgeons. Nationally, the training of plastic surgeons has become independent of surgery residency programs.

Additionally, as part of this transition, Johns Hopkins Medicine’s Burn Center will fall under the auspices of the recently created department.

A 1983 graduate of the Johns Hopkins University School of Medicine, Lee, 53, has been chief of the Division of Plastic Surgery and professor of surgery and orthopedic surgery at the University of Pittsburgh School of Medicine since 2002. Lee, whose team has transplanted the greatest number of hands in the United States, led the surgical team that performed the nation’s first double hand transplant in May 2009 and the first above-elbow transplant earlier this year. Lee pioneered hand transplants and created a means of using minimal anti-rejection drugs for these procedures known now as the Pittsburgh Protocol.

Lee succeeds Paul N. Manson, who had headed the division—formerly part of the Department of Surgery—since 1990. Manson will continue as a faculty member within the department, conducting research and seeing patients.

“Andy Lee is an outstanding plastic surgeon, physician, teacher, researcher and administrator,” said Edward D. Miller, the Frances Watt Baker, M.D., and Lenox D. Baker Jr., M.D., Dean of the Medical Faculty and CEO of Johns Hopkins Medicine. “We are convinced that he will serve not only the needs of the Department of Plastic and Reconstructive Surgery but also those of the medical school, its students and faculty.”

Lee’s research interests focus on “tolerance strategies” for composite tissue allografts, such as a hand or face transplant, to minimize the need for long-term systemic immunosuppression. He has received approximately $5 million of federal funding for his investigations, authored more than 115 original publications in peer-reviewed journals and written more than 35 textbook chapters on hand surgery and composite tissue transplant subjects.

Julie Freischlag, chair of the Department of Surgery and a member of the team that recruited Lee, said that the hand surgeon “brings to Johns Hopkins not only his surgical credentials but a demonstrated ability to envision the future and build world-class programs.”

At the University of Pittsburgh, Lee built a division of more than 20 faculty members with a focus on plastic surgery research and surgical techniques and brought them to international prominence. As its chief, he also oversaw its renowned plastic surgery residency and hand and microvascular surgery fellowships.

He received his bachelor’s degree in physics with honors from Harvard College in 1979. After graduating in 1983 from medical school and finishing his general surgery residency in 1989 at Johns Hopkins, Lee completed his plastic surgery fellowship at the Massachusetts General Hospital in 1991 and his orthopedic hand fellowship at the Indiana Hand Center in 1993. That same year, he joined the academic faculty of the Division of Plastic Surgery at Massachusetts General Hospital, Harvard Medical School, and became director of its Plastic Surgery Research Laboratory and subsequently chief of Hand Service in the Department of Surgery. In 2002, Lee was recruited to the University of Pittsburgh to head its plastic surgery program.