Coming soon: A thank you to remember

What do you do when your video is a smash hit? A sequel, of course 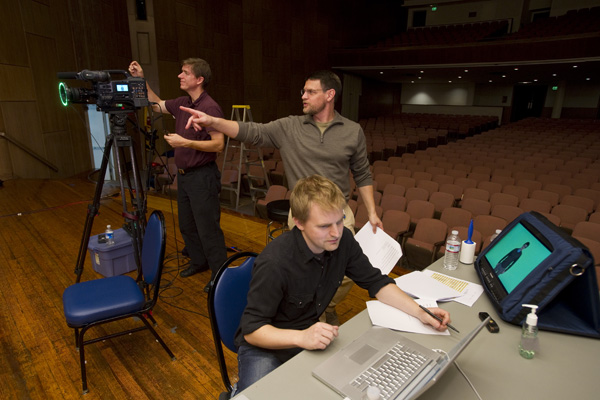 On the Shriver Hall stage, Jay Corey directs a participant while Jim Trone mans the camera and David Schmelick handles the music and monitors. Photo: Will Kirk/Homewoodphoto.jhu.edu

Stephanie Delman took the Shriver Hall stage somewhat sheepishly, but eager-eyed and ready to please. A lone camera with a green halo-like ring trained on the senior Writing Seminars major, who stood there in an animal-print shirt, black pants and tall brown boots. Behind her hung a large gray cloth, a “green screen” primed for some video magic to come later.

Delman is not an actress, but this day she’s a star.

For her scene, Delman was asked to jump into camera view and lip-sync her heart out. Jay Corey, the director, instructed her to put Milli Vanilli to shame.

“You can’t oversell this,” said Corey, an actor-friendly sort with rolled-up sleeves and a few days’ growth of beard on his face. “Think over-the-top—and go over that.”

Delman took a few attempts to get warmed up. She came close, but Corey wanted a smidge more energy. Along the way, he supplied heaps of levity, even in the form of criticism. He called one take “horrible” in the most charming, non–Stanley Kubrick way possible.

She eventually nailed it. “Fantastic. That’s it,” Corey said.

His John “Hannibal” Smith grin said it all. Corey loves it when a plan comes together.

The plan in this case is President Ron Daniels’ 2010 end-of-year thank you video, a sequel of sorts to the wildly popular We Thank You! YouTube video (thankyou.jhu.edu) that Corey produced last year at this time.

The We Thank You! video featured President Daniels and a cavalcade of Johns Hopkins students, faculty and administration members lip-syncing—and dancing, stomping and otherwise hamming it up—to a Corey-tweaked version of the Sam and Dave tune “I Thank You.” The video garnered 59,000 hits, but the actual number of views was considerably higher, said Corey, director of video strategy for the university’s Office of Marketing and Creative Services.

“For the first several months the video was on AutoPlay, and YouTube doesn’t count AutoPlay,” he said. “In any case, the response was incredible.”

Even 59,000 hits outshine the reaction to similarly themed videos produced by other institutions. Many took notice. In the months after the video’s release, Corey was approached by representatives of more than 20 schools who wanted to know Johns Hopkins’ secret thank you video formula. The video also got mentions in several higher education blogs and publications.

So what to do for an encore?

“I originally wanted to do something completely opposite of last year,” Corey said.

His original plan involved a one-day shoot in the newly renovated Gilman Hall with a troupe of people singing “The Johns Hopkins Ode: Veritas Vos Liberabit.” Haven’t heard that one? Well, neither had many others, Corey soon found out. He decided to switch gears.

What happened next was an example of bizarre coincidence.

His original idea scratched, Corey decided he would do a take on Gilbert and Sullivan. He knew what song he wanted to use but was a bit daunted by the lyric-writing process. He felt up to the task but had to wrap up a video project on the renovation of Gilman Hall.

Meanwhile, the JHU Alumni Association had set in motion a Rock On: “One University” Song Contest. Turns out, alumna Marci Kenney and Corey are of the same mind when it comes to tunes that incorporate the entire Johns Hopkins enterprise. Kenney, a graduate of the School of Arts and Sciences and SAIS, had written for the contest a parody of the same Gilbert and Sullivan song that Corey and others had started to rework.

“So, one day I receive this e-mail [from a colleague involved with the contest] and here was nearly the entire song I had in mind, completely written,” Corey said. “And Marci didn’t know we were doing this. And it had the same exact beginning line.”

Corey said that he and some colleagues had to change some of the lines but ultimately went with roughly 75 percent of Kenney’s original.

“I later told her it was like she wrote the novel and we had to write the screenplay,” Corey said.” She saved me easily two weeks of time, and mine wouldn’t be nearly as good.”

As directory of video strategy, Corey is responsible for all components of video design, production and implementation for the Marketing and Creative Services team. He brings to the position more than 20 years of experience as an award-winning producer, writer, videographer, editor, media manager and advertising agency creative director. Before joining M&CS, Corey spent nine years working for Johns Hopkins Medicine, where he spearheaded the creation of an internal video services department for the JHM Department of Marketing and Communications.

The video was shot mostly over two days on the Shriver Hall stage, with bits filled in over three weeks.

To star in the video, Corey, with the help of several JHU colleagues, enlisted Peabody singers and more than 50 students, faculty members and administrators.

Who’s in it, and how does the song go? Well, Johns Hopkins will find out the week of Dec. 27, when it’s premiered on the university home page.

You might see a Nobel laureate, a varsity athlete or two, world-renowned faculty, high-ranking JHU officials, a fuzzy mascot and some of the people who made the video and song possible.

Corey said he enjoyed working with all the participants.

“It’s fun, but it’s exhausting,” he said. “Basically, you are asking people who are not actors to really let loose.”

And let loose they did.