How is Baltimore’s housing holding up in the Great Recession? 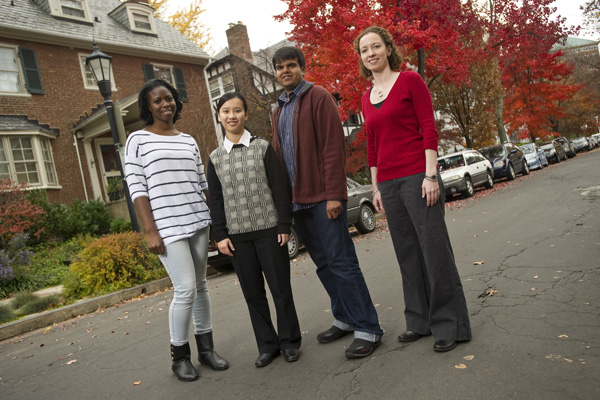 Amaka Okechukwu, Vieen Leung, Obeid Rehman and Amy Lynn Matthews in Tuscany-Canterbury, one of the 14 Baltimore City neighborhoods analyzed by their class for a course titled Policy Analysis for the Real World. Photo: Will Kirk/Homewoodphoto.jhu.edu

Despite increases in unemployment, Baltimore is holding its own during the Great Recession, with only modestly declining median income and home prices to show for themselves at the end of the tumultuous first decade of the 2000s.

That’s the preliminary report from 50 first-year graduate students in the university’s Master of Public Policy program who spent the fall semester analyzing a variety of low-, moderate- and high-income neighborhoods to see how they fared after the housing bubble burst.

The students, enrolled in the core course Policy Analysis for the Real World, will share their findings this week with an audience of 30 to 40 representatives of city government and neighborhood organizations.

This is the 16th year that Sandra Newman, professor of policy studies and director of the Center on Housing, Neighborhoods and Communities at the Johns Hopkins Institute for Policy Studies, has used her “real world” course to give her students a taste of what a career in public policy will be like, whether they are pursuing work as analysts or service roles.

Of the six policy analyses on which the students work during the term, one focuses on a public policy problem in Baltimore. Newman spends each spring visiting city leaders, nonprofit organizations and neighborhood associations to brainstorm interesting topics for her students to tackle in the fall. Then she drafts a hypothetical directive from the mayor, charging students with a research task that will offer insight to city leaders as they attempt to solve a particular problem. Past classes have studied abandoned and vacant housing and the pros and cons of inclusionary housing ordinances designed to foster the growth of mixed-income communities.

The final project has students playing many roles, conducting person-on-the-street interviews with residents, poring over data from various sources and drawing conclusions for a professional-caliber presentation at the end of the term. While the mayor’s “memo” is actually written by Newman, city leaders are always in the audience for the final presentations, and they receive copies of the students’ reports when they are published as part of the IPS occasional paper series in the spring.

“Part of the rationale for the presentations is to have the students prepare a formal briefing to present to an audience,” Newman said. “But we are really hoping that the audience of experts—and we define ‘expert’ many different ways to include city officials, foundation folks and residents—will ask questions and offer their own interpretations that the students can then factor into their final report.”

Before beginning their analysis of the economic indicators of employment, income and home sales, the students worked with Newman to determine a timeline, with 2000 as the baseline, 2001 to 2002 as an earlier recession, 2003 to 2006 as the housing boom period and 2007 as the start of the recession.

As might be expected during a major recession, the teams found increases in unemployment in virtually every neighborhood they studied, with the exception of Greektown, which was attributed to its having Johns Hopkins Bayview Medical Center as an “anchor employer” located within it. At the same time, median income changed very little, with only modest declines across the board comparing the periods before and after the recession. Median home prices proved the most intriguing, Newman said.

“Sale prices in the city have retained a good bit of their value over time, and many neighborhoods have experienced an uptick since the bubble burst, even if they haven’t returned to their 2000 starting point,” Newman said.

High-income neighborhoods, particularly those in the north of the city along the border of Baltimore County, were the exception: They didn’t display trends indicative of a housing bubble, according to student Amy-Lynn Matthews. Sale prices increased and retained their value in those neighborhoods, but the number of sales decreased. One theory is that home prices in the nearby suburbs were lower, making them more desirable to buyers, Matthews said. The 2009 median sales price was at least $20,000 lower, on average, in the census tracts along the northern city-county border than in the three sampled high-income tracts in the northern segment of the city.

The Johns Hopkins community is welcome to hear the students’ reports during the presentation at 9:15 a.m. on Tuesday, Dec. 14, in 210 Hodson Hall, but RSVPs are requested via e-mail to lvr@jhu.edu.