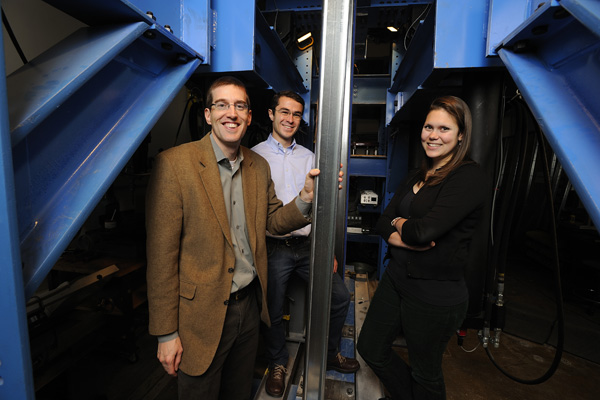 Ben Schafer with grad students Luiz Vieira and Kara Peterman in the lab where he is studying how seismic forces affect mid-rise cold-formed-steel buildings. Photo: Will Kirk/Homewoodphoto.jhu.edu

Cold-formed steel has become a popular construction material for commercial and industrial buildings, but a key question remains: How can one design these structures so that they are most likely to remain intact in a major earthquake?

To help find an answer, Johns Hopkins researchers have been awarded a three-year $923,000 National Science Foundation grant to study how seismic forces affect mid-rise cold-formed-steel buildings, up to nine stories high. The work will include development of computer models as well as testing of two-story buildings placed atop full-size “shake tables” that replicate forces up to and greater than those of any modern-day earthquake.

Lead researcher Benjamin Schafer of the university’s Whiting School of Engineering said that there is a critical need for the data these experiments should yield.

“We do have a conservative framework for how to build cold-formed-steel structures to withstand earthquakes, but we don’t have all of the details,” said Schafer, the Swirnow Family Scholar, professor and chair of the Department of Civil Engineering. “Beyond avoiding complete collapse, we don’t know how a lot of building materials will be damaged when certain levels of earthquakes occur. Information gaps exist for a lot of building materials, but the gaps for cold-formed steel are really big. We’re trying to fill in some of those gaps in knowledge.”

The cold-formed-steel pieces that are commonly used to frame low- and mid-rise buildings are made by bending about 1-millimeter-thick sheet metal, without heat, into structural shapes. These components are typically lighter and less expensive than traditional building systems and possess other advantages. For example, cold-formed-steel pieces are more uniform than wooden components and do not share wood’s vulnerability to termites and rot. Cold-formed steel also is considered a “green” material because modern producers use 100 percent recycled metal.

Structural engineers who design cold-formed-steel buildings need more information about how the material will perform during earthquakes, Schafer said, in part because of revised thinking in the construction industry. “The old approach was to just make sure the building didn’t fall down in an earthquake, even if it was no longer safe or was too badly damaged to be used afterward,” he said. “Now, we’re focusing on what you can do to bring it up to a higher level of performance to make sure that the building can still be used after an earthquake, when desired.”

Some of the motivation for this is coming from the insurance companies and business owners who are economically tied to such structures. If a critical warehouse or a major customer service center can continue to operate after an earthquake, the business owners will likely incur lower losses. “For this reason, a sturdier building can lead to lower insurance rates and provide a level of business confidence for certain owners,” Schafer said.

But how can a business owner or insurance company predict how well a cold-formed-steel building will stand up to an earthquake? Current estimates rely on a technique that tests how quakelike forces affect a single portion of a wall. Schafer’s study, in contrast, will treat the structure as a full system that includes complete walls, floors, roofs, interior walls and exterior finishes, all of which can contribute to how well the building stays intact when severe shaking occurs.

To compile this data, Schafer and his colleagues will test building components in a structural engineering lab at Johns Hopkins. They will also develop computer models aimed at predicting how well these building components and structural designs will resist earthquake forces. In the third year of the study, the researchers will conduct full-scale building experiments at the Network for Earthquake Engineering Simulation equipment site at the University of Buffalo, State University of New York. This site has full-size shake tables that will allow the researchers to mimic the effect of an earthquake on various configurations of multistory cold-formed-steel-framed buildings.

“The ultimate purpose of this project,” he said, “is to give structural engineers better tools to make predictions about what will happen to cold-formed-steel buildings in an earthquake. That will give them more flexibility to design the whole building and will give them the validation to know that it will stand up to a certain magnitude of earthquake forces.”

Schafer’s collaborators in the study include Narutoshi Nakata, an assistant professor of civil engineering at Johns Hopkins; a Bucknell University team led by Stephen G. Buonopane, an associate professor of civil and environmental engineering, who earned his civil engineering doctorate at Johns Hopkins; researchers from McGill University in Canada; and professional engineers from Devco Engineering, based in Oregon. Additional funding and support will be provided by the American Iron and Steel Institute and by Bentley Systems, a developer of engineering software.

As part of an outreach effort, students from Johns Hopkins, Bucknell and Baltimore Polytechnical High School also will take part in the research project.

For more on the research project, go to www.civil.jhu.edu/cfsnees.