A day to remember

University community gathers at cemetery to pay tribute to founder 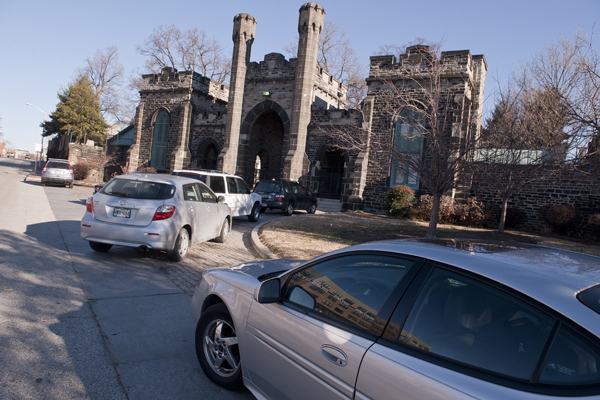 A line of cars arrives at Green Mount Cemetery on Christmas Eve morning for the annual graveside remembrance of Johns Hopkins, who died on Dec. 24, 1873. Photo: Jay Vanrenselaer/Homewoodphoto.jhu.edu

This year’s graveside remembrance of the university’s founder took an unexpected turn: The faithful arrived for the gathering at Green Mount Cemetery as they had each Christmas Eve day since 1998, the 125th anniversary of Johns Hopkins’ death, only to find the gates to the property inexplicably locked.

With no way to gain access to the private facility, attendees huddled by the picturesque entrance while Ross Jones, vice president emeritus of the university, led the informal tribute to Mr. Hopkins, who died on Dec. 24, 1873.

Jones, who organizes the annual observance, spoke of the vision not only of the man who left $7 million in his will to establish the university and hospital that bear his name but of the people who took the reins when they received the endowment, at that time the largest philanthropic bequest in U.S. history.

Among those in attendance were Provost Lloyd Minor, Chief Information Officer Stephanie Reel, Alumni Association President Raymond Snow, staff, faculty, employees’ family members and others who wanted to take a moment during the busy holiday season to remember a man whose life continues to affect so many.

The wreath that is customarily placed next to Mr. Hopkins’ simple tombstone “as a token of admiration and gratitude,” Jones said, was brought to its proper place when the cemetery reopened.