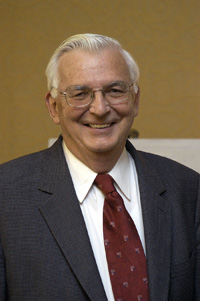 Mary O’Melia, his wife of 54 years, said that her husband was diagnosed with brain cancer shortly after Thanksgiving and died in his sleep while receiving hospice care at the family’s home in Timonium, Md. “It was a very peaceful passing,” she said. In recent weeks, many friends, former students and professional colleagues had sent cards, sharing favorite memories. “It meant a lot to him,” Mary O’Melia said.

At the time of this death, Charles O’Melia was a professor emeritus in the Department of Geography and Environmental Engineering in the university’s Whiting School of Engineering.

O’Melia, known to family and friends as Charlie, left behind a highly respected body of work. In 2005 the journal Environmental Science and Technology paid tribute to O’Melia in a special issue, calling attention to his studies of how particles behave in water and how best to remove them. A commentary piece in the journal said, “His work has inspired scientists and engineers worldwide and has made a profound impact on the design and operation of water treatment plants.”

In a joint message to the Whiting School, Nick Jones, dean of the school, and Edward Bouwer, chair of DoGEE, said, “A true scholar and gentleman, Charlie embodied the best of Johns Hopkins. His generosity and warmth of spirit were matched by a terrific dedication to his work as a researcher, educator and scholar. Charlie had a tremendous impact on the department, the university and the field of environmental engineering, and his passing is a terrible loss to generations of his colleagues, students, friends and leaders throughout the water industry and academia.”

In an interview, Bouwer added, “Charlie’s impact on the profession of environmental engineering, especially in the area of water and wastewater treatment, has been immense. He did pioneering work on removal of particles from water. His models and methodology have really stood the test of time and are still being used today.”

O’Melia was considered one of the world’s foremost experts in filtration and coagulation. In recognition of his water treatment expertise, he was chosen a decade ago to chair an advisory committee that reviewed the management of New York City’s water supply.

His many honors included election in 1989 to the prestigious National Academy of Engineering. In 2000, he was the recipient of the Athalie Richardson Irvine Clarke Prize, one of the top awards in the field of water-related research and technology.

The Clarke honor came with a gold medallion and a $50,000 prize. In an interview when the award was announced, O’Melia, known for his humble demeanor, said, “I’m going to keep the medal and give away the money. If I’d won the lottery, I wouldn’t give all of that money away. But this was an award associated with some of the work I’ve done, and I didn’t want to profit from it. I wanted to recognize some of the places that have helped my wife and me to get here. It was a team effort.”

O’Melia donated some of the prize money to Manhattan College, where he received his bachelor’s degree in civil engineering in 1955. The gift was designated for an endowment honoring Donald J. O’Connor, a professor who introduced O’Melia to environmental engineering. The remaining funds were donated to Fontbonne Hall, a Catholic girls’ high school in Brooklyn, N.Y., that his wife attended.

O’Melia maintained lifelong ties to New York City. He was born in Manhattan in 1934 to a mother who taught elementary school and a father who was an accountant for a construction company. He grew up in the Bronx and Brooklyn and attended his father’s alma mater, Manhattan College.

His fascination with the city’s bridges, tunnels and tall buildings initially led him to study civil engineering. But gradually he was drawn to the emerging field of environmental engineering. “It just seemed more intellectually challenging at the time,” he said in a 2000 interview with the Johns Hopkins Gazette. “It also allowed me to do something that involved serving the public.”

Afterward, he taught at Georgia Tech, did further research at Harvard University and then served on the faculty of the University of North Carolina at Chapel Hill. During these years, he developed a love of teaching and research that remained with him throughout his career.

In 1979, The Johns Hopkins University re-established a separate engineering school. O’Melia was recruited for a faculty post in the rejuvenated Department of Geography and Environmental Engineering and was hired in 1980. He spent 27 years with the department, including two terms as department chair, and mentored numerous master’s and doctoral students, many of whom went on to become prominent professors at other schools and leading figures in government and private engineering posts.

“As a teacher, Charlie was simply extraordinary,” said William C. Becker, one of O’Melia’s former doctoral students and now vice president and director of Water Process Technology and Research at Hazen and Sawyer, a New York consulting firm. “He had a way of explaining very complex material in terms that were understandable. More importantly, he taught his students to always look at problems in terms of first principles but to also always keep an eye on the big picture. As an adviser he demonstrated creativity, clear vision and true excellence.”

Becker also described O’Melia as “a phenomenal role model” and “perhaps the most humble person I have ever met, always giving credit to others. In summary, Charlie embodied all of the characteristics of a true mentor.”

During his years at Johns Hopkins, O’Melia saw his home department rise in stature. “It’s been remarkable to see the growth of environmental engineering in the department from almost nonexistent in 1980 to a program that’s consistently ranked among the best in the country,” O’Melia told Johns Hopkins Engineering magazine in 2007, when he announced his retirement.

During his years on the faculty, he also served on national advisory panels and in water research organization positions, while continuing to conduct important studies in aquatic chemistry, environmental colloid chemistry, water and wastewater treatment, and modeling of natural surface and subsurface waters. In 1999, he was named the university’s Abel Wolman Professor of Environmental Engineering, a position established in honor of a renowned Johns Hopkins faculty member who pioneered modern water supply chlorination methods.

O’Melia also continued to be the subject of tributes for his teaching and his research. One of the most noteworthy events occurred in 2004, when he was honored with a symposium and dinner at a national meeting of the American Chemical Society, held in Philadelphia. Over a three-day period, 44 oral presentations were delivered and a poster session held, all in honor of O’Melia and his research.

Shortly after the event, O’Melia told The Gazette that he had been reluctant to be the focus of such attention. But he also said that he had attended every scholarly presentation at the meeting and was delighted by the content. “I was impressed,” he said. “Everyone I talked to felt that the level of research was very high. To me, the good thing was to see more focus on this area of research—particles, pollutants and interfaces in water.”

Regarding the tribute dinner, he added, “They showed a lot of playful old pictures that neither my wife nor I knew existed. There was a lot of mirth and laughter and camaraderie.”

O’Melia’s favorite avocation was basketball. Until an injury sidelined him at age 60, he was known as a fierce competitor on the court in pickup games with his students and colleagues.

A memorial mass was held Dec. 29 at St. Joseph’s Parish in Cockeysville, Md.

The university’s Department of Geography and Environmental Engineering will hold a service in honor of O’Melia at 10:30 a.m. on Saturday, March 12, on the Homewood campus; the location will be announced after the start of the next semester.